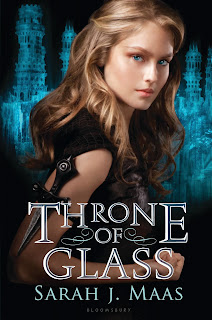 Throne of Glass (Throne of Glass #1) by Sarah J. Maas
Bloomsbury Children, 404 Pages
US Release Date: August 7, 2012
Format/Source: Print ARC (via publisher at ALA 2012), and an eARC via NetGalley

After serving out a year of hard labor in the salt mines of Endovier for her crimes, 18-year-old assassin Celaena Sardothien is dragged before the Crown Prince. Prince Dorian offers her her freedom on one condition: she must act as his champion in a competition to find a new royal assassin. Her opponents are men-thieves and assassins and warriors from across the empire, each sponsored by a member of the king's council. If she beats her opponents in a series of eliminations, she'll serve the kingdom for three years and then be granted her freedom.

Celaena finds her training sessions with the captain of the guard, Westfall, challenging and exhilirating. But she's bored stiff by court life. Things get a little more interesting when the prince starts to show interest in her... but it's the gruff Captain Westfall who seems to understand her best.

Then one of the other contestants turns up dead... quickly followed by another.

Can Celaena figure out who the killer is before she becomes a victim? As the young assassin investigates, her search leads her to discover a greater destiny than she could possibly have imagined.
-------------------Goodreads summary

Notable Quote
We each survive in our own way.

The Goods
EVERYTHING.
Also, Chaol. Oh, Chaol. *fans self*
Oh, and Celeana's dresses.

The Consensus
I rarely ever (if ever) read high fantasy, but I would seriously read Throne of Glass over and over for the rest of my life. The plot, the characters, the setting, Sarah's writing, absolutely everything is enchanting and brilliant.

The Recommendation
For anyone. Everyone. All. Even if you don't like to read, read it. You'll love it. I swear.

In the interest of full disclosure: (1) I read Throne of Glass last year. Months ago, before it was actually released. But I still wanted to post a "review" because it deserves a little recognition on my blog since I loved it so fucking much. (2) I do know Sarah in real life, we've met on several occasions and she is just as fantastic and amazing as her writing/characters. I adore her. And (3) I know this isn't really a review to contribute anything to her masses of fans, but I had to do it as I gear up to read Crown of Midnight (book 2). Also, I needed Chaol on this blog somewhere.
Posted by Ashley @ Ashley Loves Books at 12:00 AM