Review: The Theory of Everything by Kari Luna (ARC) 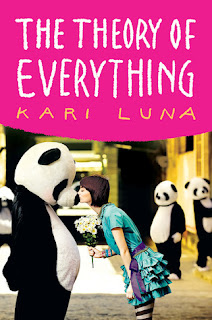 The Theory of Everything by Kari Luna
Philomel (an imprint of Penguin), 320 Pages
US Release Date: July 11, 2013
Format/Source: ARC, via Around the World ARC Tours - thank you!
Challenges: SARC 2013, Contemporary Challenge

Sophie Sophia is obsessed with music from the late eighties. She also has an eccentric physicist father who sometimes vanishes for days and sees things other people don’t see. But when he disappears for good and Sophie’s mom moves them from Brooklyn, New York, to Havencrest, Illinois, for a fresh start, things take a turn for the weird. Sophie starts seeing things, like marching band pandas, just like her dad.

Guided by Walt, her shaman panda, and her new (human) friend named Finny, Sophie is determined to find her father and figure out her visions, once and for all. So she travels back to where it began—New York City and NYU’s physics department. As she discovers more about her dad’s research on M-theory and her father himself, Sophie opens her eyes to the world’s infinite possibilities—and her heart to love.
-------------------------Goodreads summary

Notable Quote
But Finny stayed right where he was. He didn't bundle me up and put me in the car in the middle of the night or pretend he didn't hear me. He held on and didn't let go. All so that I could.

I feel like there’s been a trend of “smart” books in YA, of books that really delve into the science behind certain phenomena. Some I’ve read I really love; others, it doesn’t quite fit. The Theory of Everything is one that definitely fits into one I absolutely LOVED.


One of my main notes I wrote down was: Chaotic. There is a certain amount of chaos that permeates this entire book, and sometimes it was a little odd or hard to track; but at the same time, it really works and reflects the content well. This is about String Theory and parallel worlds and traveling across time and dimensions – I’d be a little more worried if it were straightforward and clear! Still I should warn that there are some moments where I definitely had to re-read a few paragraphs to reorient myself to what was going on. It was mostly when Sophie was shifting into another world, but a few other times as well.

The entire plot of this novel was so funny and creative, I couldn’t help but fall in love with it. I mean, how could you not want to visit a panda-verse and have a panda shaman?! I want a panda guide! Even if he was so frustrating with his riddles and letting her figure things out for herself (guides, man – so unhelpful until you realize how helpful they are). All the dimensions Sophie finds herself in are so much fun, and I love that they’re unique and adventuresome without being terrifying or too old for the novel. It creates this awesome playful vibe as you read, and I loved being in it. Even though at it’s core it’s about her missing father and her search for his love, there’s still a nice happiness and anticipation that moves through all the words.

A lot of that is probably thanks to Finny, Sophie’s new physics-obsessed friend. I LOVE FINNY. Oh my goodness. I have never wanted to snatch a friend out of a novel so badly and keep him as my own. He’s such a loyal, brilliantly funny friend, and he is perfect for Sophie. If I could hug him forever, I would.

One of the only things I had to keep doing was remind myself Sophie is only 14. I can’t figure out if I thought some of the things she was going through were a bit older, or if I thought she should be older to fully understand some of the things going on—but I definitely had to take a few steps back and say “she’s 14. She’ll get there.” It was most obvious when she was just getting to know Drew, since it’s her first real crush and possible-relationship. It was like she was just discovering what it meant to be the object of someone’s affection, and somehow it seemed a bit odd fitting into this whole story about love and how love is possible and cures all.

Can I just say though, there was a quote that I Instagram’d from this book because I LOVE IT SO MUCH: 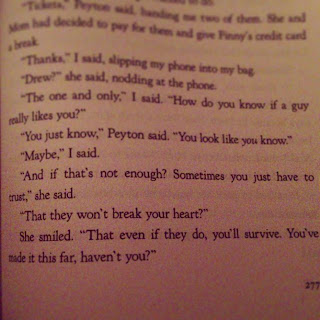 There were so many things I loved about this book. The weird family and how they fit together even when they were kind of breaking apart. All the lists that Sophie made to get through situations. Even how we kind of know what may happen in the end was satisfying, and I wouldn’t want it to work any other way.

The Theory of Everything has a little of everything in it for everyone: friendship, romance, family, and the overarching lessons of love and how it can literally push things beyond what we know.  You’ll love the people you meet, the places you go, the musical numbers that surprise you, and the panda that guides you.
4.5 Stars