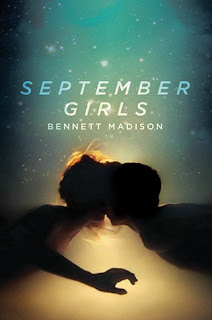 When Sam's dad whisks him and his brother off to a remote beach town for the summer, he's all for it-- at first. Sam soon realizes, though, that this place is anything but ordinary. Time seems to slow down around here, and everywhere he looks, there are beautiful blond girls. Girls who seem inexplicably drawn to him.

Then Sam meets DeeDee, one of the Girls, and she's different from the others. Just as he starts to fall for her, she pulls away, leaving him more confused than ever. He knows that if he's going to get her back, he'll have to uncover the secret of this beach and the girls who live here.
-----------Goodreads summary

Notable Quote
"...I choose to believe it even if it's fake. Sometimes you can locate a truer version of the truth somewhere in a total lie."

When I first heard of September Girls (thanks to #TeaTime with Epic Reads!), I wanted to read it immediately. I’m not super into books that have a weird mystical element, but it sounded like it could be different, intriguing and worth it – plus, the girls kept saying Bennett had beautiful writing! And then reviews started coming in about how weird and odd it was, and I got a little scared. I’m already iffy on the content, and suddenly people I trust aren’t feeling it? This doesn’t bode well.


All those reviews that harp on September Girls and call it strange? Totally correct. This is a bizarre book, and I can’t even explain it fully as to why. The story itself is just so strange and out there, and a lot of the plot I was just staring at the pages thinking, “What?”

But truthfully? I didn’t not like this book. I walked away plenty confused, slightly disturbed, and wholly lost – but there’s still something about it that’s staying with me and appealing to me.

One of the blurbs on the back of the ARC compared the book to a Ned Vizzini one (and we all know how I feel about him), which is COMPLETELY accurate as well. The humor is similar, in that it’s a little crude, a little dark but also totally like a typical guy of that age. There’s a similarity in the character’s world view, and because I am a Vizzini fan, I found it really appealed to me. Maybe it’s weird to admit I’ve got the same humor as fictional 17-year-old boys, but there it is: it was right up my alley, and I was immediately taken with Sam. He had a clear voice, a very clear character, and I appreciated that. True, some of the dialogue and phrases are completely inappropriate; but I felt like some of it was necessary to the character.

Even though I really liked the writing and the technical aspects, I wasn’t quite sold completely on the characters themselves. I wanted Sam to grow up faster, I hated his brother and wanted to bonk him on the head most of the book. The Girls were so odd, and even though DeeDee was supposed to be “different” than all the rest, I just didn’t see it. And I put this as a status on GoodReads, but it still gets to me: what is up with the excessive use of ‘ho’?! Girl-on-girl shaming should not be done, and it was just a wreck in this book. Sure, Kristle is a pretty big slut for a whole hell of a lot of the novel (no matter how “justified” we learn she is at the end), but still – it doesn’t need to be listed 982389402834* times in one paragraph.

Here’s the thing about September Girls, and this is a big reason as to why I didn’t like it and as to why I always will: it seemed to me like a required reading in high school. You know: one that a teacher makes you analyze to death, break it down scene by scene and figure out what the symbolism of the sand is.  I felt like I was supposed to be reading this book on several different levels at the same time, seeing it for what it was while still trying to figure out what my thesis statement would be about it. And I don’t know if I’ve ever really read a modern YA that way. I vaguely felt like there was no point to the novel, but somehow at the same time I feel like I could write fifteen term papers about it, too. It’s confusing and strange and really, I just have to accept that it will always be that way.

One tiny thing that made me laugh though? The references to The Little Mermaid. So sneaky and so cheeky, Mr. Madison. I loved that.