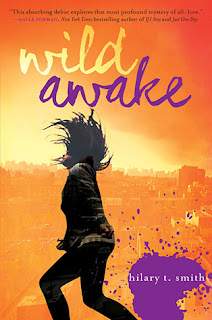 Things you earnestly believe will happen while your parents are away:
1. You will remember to water the azaleas.
2. You will take detailed, accurate messages.
3. You will call your older brother, Denny, if even the slightest thing goes wrong.
4. You and your best friend/bandmate Lukas will win Battle of the Bands.
5. Amid the thrill of victory, Lukas will finally realize you are the girl of his dreams.

Notable Quote
I practice carefully, paying attention to each note...Slowly. Obsessively. As long as I'm sitting at the piano, the entire universe is under my control. Eighty-eight keys, ten fingers. Sheet music is dependable. The notes don't change when you're not looking. You don't open your book one day to discover that your pieces have switched from major to minor, or that the fast ones have gone slow, or that the melody has changed beyond recognition, leaving your fingers to stumble over unfamiliar notes. You don't have to be brave; just careful.

Wild Awake was one of my most anticipated reads of this year – the moment I heard about it on TeaTime, I knew it was something I HAD to read. I got a little scared once I saw some of the reviews for it, but I still had every hope and faith it would appeal to me. And now that I’ve read it? I get the mixed reviews, but I am definitely one on the positive side. But for, surprisingly, very technical reasons!


I mention it often, though not at the forefront: I am a journalist. That is what my degree is in, that is what I have trained in since I was 12. That’s a whole freakin’ 14 years, guys! The habits I’ve picked up through that craft are ones I can never let go, even if I wanted to. And I think it’s with that mindset that I can really love Wild Awake.

Has anyone read Hunter S. Thompson? I think if you have, and you like his stuff – you’ll love Wild Awake, too. It’s got that same stream-of-consciousness flow, the drug-addled imagery and plot. And I don’t mean that figuratively about the story: there are so many drugs going on in this novel I would never, ever give this to my 12 year old cousin to read. Not that I expect to shelter him forever, but I’m not going to deliberately expose him to this stuff, either.

Anyway, Wild Awake was one part thrilling, one part terrifying, and one part completely adventurous. I never really knew what to expect with each end of the chapter, each turn of the page; and sometimes I hate that, but it really worked for this book. I wanted to go on this ride with Kiri, I wanted to figure out what was going on with Skunk, what happened to Sukey.  In some ways, I felt like I was the one tripping out and freaking about the cops or my messed up family, because I was so drawn into this turmoil Kiri was going through.

I feel like this is going to be a very polarizing book: you’re either going to hate it, or you’re going to appreciate it. Each scene evokes such distinct reactions that were so strong for me, I definitely had to pull back a few moments and consider how I was feeling towards it. Like how I’m actually kind of grossed out by Sukey and her story; but ultimately, it all makes sense and it had to go down that way. Or how repulsed I was by Doug and his imagery and that disgusting pile of junk he kept stuff under. Or like how I can’t stand synth music but the connection the characters have to it – so powerful for each even though it’s completely different for both – was so familiar to the connection I have to certain music that I couldn’t resist feeling that emotion, too.

I have to say, this book also has one of my favourite scenes in any book I’ve read this year yet: the midnight bicycle run that is kind of the kickoff of a lot of this book. It was so much fun, so filled with adrenaline that I swore the herd of bicycles was going to come bursting out of my book, right at me. I was with Kiri every pedal of her bike, every dark turn through the city – and even though I’ve never once been inclined to ride a bike, I so wanted to hop on one myself and find them to join in.

Skunk is definitely my favourite character here. He’s fantastic. He’s got so many unique elements to him, from things as obvious as collecting weird vintage radios to as subtle as his physique (former and current) to as surprising as his little part in the ending quarter of the book. He kept me on my toes, and I kind of wish I was the one who needed his help to fix the bike.

Awkwardly though, I kind of hate Kiri. I find her obnoxious and self-serving. I think she’s overly dramatic and entirely too much of a privileged kid with nothing better to do. I understand her obsession with music and how it’s practically her savior, but she drove me bonkers through her descent and how she treated her talent and piano. If it wasn’t Skunk and Kiri on the page, I wanted to scream and shout at her.

What really did save this story to me though was Skunk and his relationship with Kiri. I loved how they’re both completely messed up, in entirely different ways with their own types of problems. I loved how they reacted to each other, I loved the affection that was so prevalent through all their scenes. Even the ones where I was kind of scared of both of them and for both of them (that will make sense once you read the book), I was still so in love with him and them.  I was kind of surprised how touching their scenes were, because they’re not particularly delicate or sentimental characters. But when they’re together…it just works.

Wild Awake is a trip, in the sense of a journey and a bad drug habit. It is the every bit as colourful and chaotic as the cover depicts it – possibly even more so. And while I’m not certain that’s for everyone, it was definitely for me.