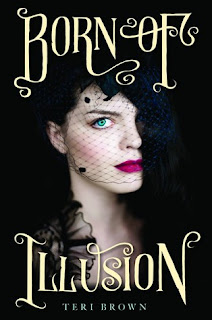 Anna Van Housen is thirteen the first time she breaks her mother out of jail. By sixteen she’s street smart and savvy, assisting her mother, the renowned medium Marguerite Van Housen, in her stage show and séances, and easily navigating the underground world of magicians, mediums and mentalists in 1920’s New York City. Handcuffs and sleight of hand illusions have never been much of a challenge for Anna. The real trick is keeping her true gifts secret from her opportunistic mother, who will stop at nothing to gain her ambition of becoming the most famous medium who ever lived. But when a strange, serious young man moves into the flat downstairs, introducing her to a secret society that studies people with gifts like hers, he threatens to reveal the secrets Anna has fought so hard to keep, forcing her to face the truth about her past. Could the stories her mother has told her really be true? Could she really be the illegitimate daughter of the greatest magician of all?
----------------------Goodreads summary

Notable Quote
The audience oohs and ahhs in all the right places and my movements get more dramatic as I warm up. Enthralling the audience is the best part, the part I love. I hate when people call magic trickery. What my mother does is trickery. What I do is entertainment.

I was a little weird going into Born Of Illusion simply because it’s things I know absolutely nothing about. Flapper era New York? Nothing. Magic? Nothing. Illusionism, Houdini? Nada. So I was simultaneously excited and nervous, since I had expectation without any sort of basis to it. But I’m really glad I pushed myself to read this! It was fascinating and a little fun, and even though sometimes it was a little frustrating, I found it fancy and overall, fulfilling.

(Why did I alliterate all those Fs? No idea. But I typed it, and I’m sticking with it!)

Like I said, I know absolutely nothing about this era, so I was really fascinated by it all! I mean, I’ve read a few books (Gatsby, mostly), seen a few movies or TV shows, but nothing concrete, so I loved everything I could garner from the descriptions. I know The Diviners by Libba Bray supposedly does it better, but for now? I’m happy with this. I was so swept up in the parties and gatherings and any sort of Society that Anna would find herself in.  Sometimes I craved a little more variety or dimension to the time, but I was happy with this.

So, onto the actual story (I guess that’s probably important…): Even though I had problems with some of it, overall I really enjoyed Born of Illusion. I really liked how Houdini played a part and we were kept guessing right along with Anna about how much he’s really a part of her. All their interactions were pretty great. I absolutely loved Mr. Darby and wish he’d had a slightly bigger part, though what he did was fantastic anyway. Anytime Anna could go to his place for tea and pastries I cheered in my head. I also loved all the magic and illusionism that went on, and how it even started getting into the séances and spiritual worlds – though I have to admit, I felt they trivialized those parts a little too much by making it a game and pawn in Anna and her mother’s tension. Still, there were some scenes I could absolutely see the show in my head and I wanted to be a part of the crowd!

Speaking of her mom, oh my goodness I did not like her! I get the resentment there, I even can kind of understand how much she feels threatened by Anna and her talents – but sometimes it was just a bit too far, y’know? I wanted to her just love her daughter for what she was, not hate her for it.

Which leads into some of my problems. Sometimes the tension was just a little too much, a little too drawn out and overdramatic. Sure, it does actually kind of fit the era and overall showman feel of the novel, but there were definitely pages I just shook my head at or rolled my eyes. I didn’t need the constant reminder of the struggle and bad relationships. Plus, I think my general annoyance at that took me away from the story a bit and I didn’t end up connecting to any of them. Sure, there were characters I generally liked, but I never really felt real emotions toward them or wanted to jump into the pages to squeeze them or kick them. Each was written well with real personalities, but they still felt a little lackluster.

And of course, I have to talk about the boys. It was another sorta-triangle situation – and I only say sorta because I swear it is super obvious which one will end up being the good boy and who will be bad. I did like that they were more to the story than just love interests, and I definitely rooted for one over the other. But one is so obvious, and the other was a bit too stereotypical. Still, I’ve read worse, and I wouldn’t mind a little Colin myself.

(Small note though: I still love the cover to pieces. So gorgeous!)