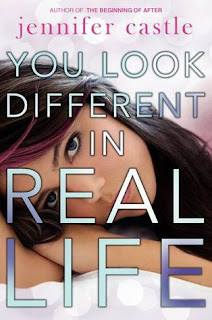 
For the rest of the world, the movies are entertainment. For Justine, they're real life.

Now sixteen, Justine doesn't feel like a star anymore. In fact, when she hears the crew has gotten the green light to film Five at Sixteen, all she feels is dread. The kids who shared the same table in kindergarten have become teenagers who hardly know one another. And Justine, who was so funny and edgy in the first two movies, feels like a disappointment.

But these teens have a bond that goes deeper than what's on film. They've all shared the painful details of their lives with countless viewers. They all know how it feels to have fans as well as friends. So when this latest movie gives them the chance to reunite, Justine and her costars are going to take it. Because sometimes, the only way to see yourself is through someone else's eyes.

Smart, fresh, and frequently funny, You Look Different in Real Life is a piercing novel about life in an age where the lines between what's personal and what's public aren't always clear.
-----------------------Goodreads summary

Notable Quote
...instead of my life shaping a film, a film would shape my life.

I read The Beginning of After by Jennifer Castle right when it came out (luck of the draw, actually – saw it propped as a new release at my library and really liked the colour tones of the cover), and though I don’t quite remember all of that book, I do remember how I felt about it when reading. I was invested. I was impressed, and even though I expected something that was delivered, there was also a little more. I remember being emotion, I remember connecting with it even though it wasn’t anything like my life.


Apparently, this is just a skill that Jennifer Castle possesses, because I felt all that and more with You Look Different In Real Life.

Have I ever told you guys how much I love documentaries? It shouldn’t surprise anyone, as I love stories and have a degree in journalism: realism and getting to know a person to the very core are things I love to do, love to discover, and love to invest in. So documentaries are perfect, and for a YA book to come along that’s all about that? Love love love.

If you’ve watched the Up series documentaries, you’ll recognize the plotline. (And if you haven’t watched them, you totally should – they’re fantastic!) Choosing varying kids from one class, all connected by a single, vaguely unimportant thread, and revisiting them every set number of years. It’s a fascinating concept, and I’m truly curious the mental and emotional toll that will take on people.

Anyway. I’ll put it out there that this story is partly predictable, in that I could tell who of the group would have what connection to each other. And I wasn’t necessarily disappointed in that, but I know some people may not like how it works out. Still, it all makes sense and I think it’s best this way. I still thoroughly enjoyed how we get to these ends, and I think that saves it.

The one fear I had is that the point of this documentary is that each of the characters are portrayed as one thing, but are so much more – and how cliché is that? Everything is like that, and I was so scared it was going to be overly done and completely stereotypical. And it wasn’t! I was pleasantly surprised how much more in depth we discover these characters, how perhaps it’s not about them being different than what they seem, but them becoming a lot like who they are thought to – just in ways we’d never quite expect.  The stereotype they are supposed to be is there, and it’s actually fun to pinpoint who they are supposed to be while simultaneously learning just how much they break the molds they’ve been shown to be.

I was also quite happy with the adventures they take in this novel; there’s an unexpected road trip, a fun little set up of a cabin retreat, times in the scary new York City…there’s a lot of intensity packed into this book, and I quite liked that. We’re treated to a lot of different scenarios with these kids, and I thought it worked beautifully to round out who they are.

I found myself drawn to Justine – perhaps not as much as some others will, but I found a lot of her in myself. Particularly how she thinks she’s uninteresting and not what the public thought she would be. These were some very real fears in my high school life (hell, they’re real fears I have now, in my adult life, too!), and I thought Justine was a great portrayal of it. There are insecurities mixed in with desires and hopes and personal beliefs, some sadness amongst her sarcasm, and she was really a character to which I could attach.

Truthfully, I liked all the characters – Felix and Rory especially, but even Nate and Keira had elements I respected and loved. They’re a diverse group, as intended – but in way more ways than you initially know. My favourite scenes were probably all the ones where the five were together, where they could interact and play off each other. Jennifer Castle really did well with this set of characters and creating a bunch I could really see together, watching and waiting to see what will happen.

You Look Different In Real Life was interesting and emotional, lending a story behind a story that reveals a little more than your typical story of being more than you seem. Jennifer Castle has created a fantastic cast of characters that shine as brightly as their Hollywood parts are intended to.