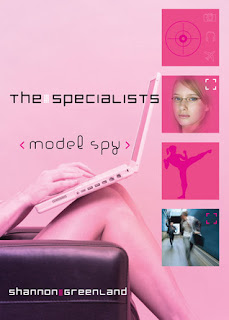 Teen genius Kelly James is in a lot of hot water. A whiz with computers, she agreed to help her college RA, David, uncover some top-secret information. After all, she doesn't have many friends and David has always been nice to her. it doesn't hurt that he's supercute and irresistible, too. All she has to do is hack into the government's main computer system. but a few hours later, her whole life changes. she is caught and taken in for questioning, only this isn't your run-of-the-mill arrest. rather than serve a juvenile detention sentence, she accepts the option to change her name and enlist in a secret government spy agency that trains teen agents to go undercover. As if that wasn't overwhelming enough, she discovers that David works for this agency as well And before she even begins to understand what is going on, she's sent on her first mission as an undercover model. And who better to partner with than David himself?
-------------------------Goodreads summary

The Goods
Meeting the Team after Kelly gets her first mission. Hilarious.
The action once they leave the compound.
I love the idea of each one being brilliant in their own way.

The Bads
How cliche is it to have a blonde barbie model girl actually being a computer coding nerd?
Kelly kind of annoys me. She's just not very likable.
Predictable. If I tell you the premise, you can probably tell me the entire story.

The Consensus
A fun read, and I hope I can track down the rest of the series somewhere!

The Recommendation
Check it out from the library when you need a fast, light read.