Review: When We Wake by Karen Healey (ARC) 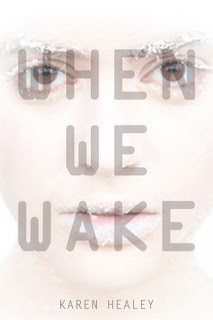 My name is Tegan Oglietti, and on the last day of my first lifetime, I was so, so happy.

Sixteen-year-old Tegan is just like every other girl living in 2027--she's happiest when playing the guitar, she's falling in love for the first time, and she's joining her friends to protest the wrongs of the world: environmental collapse, social discrimination, and political injustice.

But on what should have been the best day of Tegan's life, she dies--and wakes up a hundred years in the future, locked in a government facility with no idea what happened.

Tegan is the first government guinea pig to be cryonically frozen and successfully revived, which makes her an instant celebrity--even though all she wants to do is try to rebuild some semblance of a normal life. But the future isn't all she hoped it would be, and when appalling secrets come to light, Tegan must make a choice: Does she keep her head down and survive, or fight for a better future?

Award-winning author Karen Healey has created a haunting, cautionary tale of an inspiring protagonist living in a not-so-distant future that could easily be our own.
-------Goodreads Summary

Notable Quote
...it creeped me out, and I was worried about what they might do to persuade me, but I was much less concerned about a weirdo cult that expressly didn't want to kill me than I was about a powerful government that possibly did.
You've got to have priorities.

I'm not sure how I didn't realize this would be a sorta-political novel, especially after rereading that summary, but there it is: be prepared for a lot of enviro-speak and politics-based battles and things of that sort. It's not heavy, nor is it a lot to trudge through. In fact, it's actually all pretty fascinating and worked really well into the plot! But it's there, and it was a bit of a surprise for me. I'm actually glad I didn't realize it, because I'm usually really closed off to talk about politics, religion, you know--issues. I've got crazy avoidance tendencies when it comes to those, and I would have missed out on a fantastic novel if I'd fully grasped what was going on!

Something that also took me by surprise was how much fun I had while reading this. The humor here is fantastic - a bit dry, a bit deprecating, a bit sarcastic, but done so well that I was kind of enjoying watching Tegan and Bethari and Joph and Abdi struggle. It takes a pretty decent writer to make me have fun when I'm feeling so many things and stressing so hard about the characters!

I'm a little iffy on all the futuristic elements - mainly, the language. I enjoyed it all, don't get me wrong - and I think this is probably one of the best I've read in terms of likelihood and consistency - but I'm always a little hung up on those things. I start to consider if "ONTD" will really become a slang noun of the future, and before I know it I'm completely distracted or insisting that it's not going to happen. There are a few in When We Wake that I highly doubt would exist, and distracted me a bit, but I enjoyed a lot of others! Given more time, I might try to work a few of the words into my vocabulary (I totally use "frexing," fellow ATU fans!).

My favourite part of the novel has to be the characters - each one is so distinct and has such personality, I really loved them all. I updated my Goodreads status completely in support of Tegan once, because she's got great attitude (and by attitude, I actually mean attitude. Not a good outlook!) and I love how she's got uncontrollable rage going. She's not mean or out of sorts or obnoxious - she's angry and emotional and completely justified in all of it. I really loved Bethari and Joph, though I will tell you Beth was my favies because she's a journalist and I am totally her. There was one specific passage where I had to laugh because it's completely me when I'm trying to dig for info or get answers to questions that have been plaguing me. It was also a little crazy how quickly I came to care for Marie, she was such a fantastic mother figure to Tegan to the very end. Abdi took awhile to grow on me, and he still feels to be the most "typical" of characters. His character arc is pretty easy to guess, and there were no surprises with him. Not to say I didn't like him - I'd still hug Abdi in the dark any day - but all the others were so stellar, so he kind of fell to the background.

And ok - the ending. I can't...I mean. It's not the craziest ending there ever was, but it was still a bit cliffhanger-y and heart stopping! The structure of the novel itself was a lot of fun, how it's Tegan telling her story to us; and I loved when we found out exactly why she is. It ties everything together so well and makes so much sense. But then the end, when...I can't say, of course, but damnit where is Book 2 when I need it?! (THERE IS A BOOK 2, RIGHT?!)

Best surprise ever with this book? Every chapter title is a Beatles song, and I loved that. They were all so relevant to the content, and it was like a fun little soundtrack since I would get the song stuck in my head the moment I read the title!