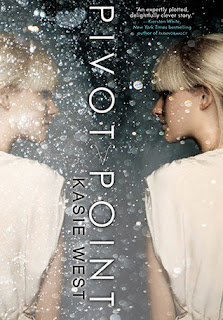 Addison Coleman’s life is one big “What if?” As a Searcher, whenever Addie is faced with a choice, she can look into the future and see both outcomes. It’s the ultimate insurance plan against disaster. Or so she thought. When Addie’s parents ambush her with the news of their divorce, she has to pick who she wants to live with—her father, who is leaving the paranormal compound to live among the “Norms,” or her mother, who is staying in the life Addie has always known. Addie loves her life just as it is, so her answer should be easy. One Search six weeks into the future proves it’s not.

In one potential future, Addie is adjusting to life outside the Compound as the new girl in a Norm high school where she meets Trevor, a cute, sensitive artist who understands her. In the other path, Addie is being pursued by the hottest guy in school—but she never wanted to be a quarterback’s girlfriend. When Addie’s father is asked to consult on a murder in the Compound, she’s unwittingly drawn into a dangerous game that threatens everything she holds dear. With love and loss in both lives, it all comes down to which reality she’s willing to live through . . . and who she can’t live without.
----------------------------Goodreads summary

Notable Quote
He shrugs. "Doesn't help to waste my time thinking about would've-beens."
Laila whispers, "He says to the girl with a mind full of them."

If you had the opportunity to see the outcomes of a choice, would you? Would you knowingly see what would happen on either side to make your decision? I'm not sure I would, to be honest. It'd be tempting, and I might do it once or twice - but I think it's a dangerous thing to know. How can you knowingly choose something over another? If it were a simple decision, it'd be easier to live with, of course - but if it were a decision like Addison's? I'm not sure I'd have the strength for it.

I loved Pivot Point so much, you guys. It's a fantastic concept with just the right amount of tension and worry and swoonage. The world of the Paranormals is so much fun to learn about, and I love that it's one that co-exists in a Normal world - not a true Dystopian, but one that's like a hidden society (that I would TOTALLY love to be a part of! I want an Ability!). It's a little bit paranormal with a little thriller, a little science fiction, and the best part to me? Totally reads like a contemporary!

Something I was a little iffy on was the idea of Addison's parents getting a divorce - I know it has to happen to make her Search her futures and see what would happen depending on who she opts to live with, but it felt like such a flimsy reason and a little too device-y for me. It's one of those plot elements that's necessary, but I personally resent them because they're forced and make me feel like I'm being manipulated to believe it. Especially since it's such a small portion of the novel anyway; it's the catalyst, but most of the pages are dedicated to each of her futures. The divorce hardly gets revisited, and while I don't want to dwell on that part or turn Pivot Point into some emo novel, I was definitely expecting it to be a larger part.

But that's a small annoyance, and I only had 2! The other is that the conclusion comes pretty fast. I read 300+ pages, for it to be done in what felt like 5. There is the set up for more (as this is part of a series, it makes sense), but it's quick and I seriously feel like if you blink too fast, you're going to miss the end to this. Which I suppose is fine, but it messed with my pacing for just a brief few moments.

Other than that? I LOVE THIS BOOK. I had no idea how much I would love it! It's fascinating getting to see Addie's life in the Norm world trying to assimilate versus her life staying in the Compound and getting to have a life using Abilities and being surrounded by people with abilities. And while I of course had my favourite path, I enjoyed both extraordinarily. The entire plot concept is so clever, because I definitely went into reading this wondering if I'm just going to read two versions of this girl's life, she'll figure out which one is ultimately better (sure, there'd be heartache, but it'd be worth it in the with her upstanding and humane decision), and then we move along. But it is SO SO much more, and I loved that moment where it clicked that these two futures are irrevocably tied together. Especially when one starts to influence how you see the other; Kasie's writing is fabulous and works so well making you heart leap between the two Futures.

How could I possibly do this without chatting about the boys?! Duke, the asshole douche with a heart that you can't help but love; and Trevor, the quiet cowboy with a solid stance and secret behind his eyes. It was never a question which one I prefer (I don't really do cowboys but there is absolutely ZERO way to resist Trevor), but I have to say I was surprised how much I liked Duke, too. He's so typical and charming and you want to hate him, but he's perfectly the character you can't help but laugh at. We all have those boys in real life, and Kasie does him wonderfully to make him real, too. There was a brief, flickering moment where I thought "Oh no, do I like Duke more?!"....but then I read the Norm future with Trevor and was like "Nope. Not a question. Nope nope nope." I usually scoff at readers who "claim" characters and say this boy is hers or that boy is hers for keeps - but omg, I CLAIM TREVOR.

Wow. That got ugly.

Pivot Point is a fantastically tense novel, with tons of characters to love, situations to agonize over, and decisions to make. You will feel every bit of anxiety and pressure Addison does, just as you will come to understand how impossible the decision is to make. You will love it, I assure you.