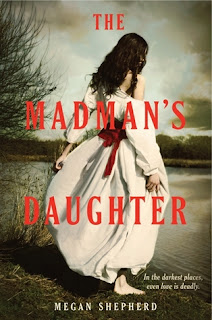 In the darkest places, even love is deadly.

Sixteen-year-old Juliet Moreau has built a life for herself in London—working as a maid, attending church on Sundays, and trying not to think about the scandal that ruined her life. After all, no one ever proved the rumors about her father's gruesome experiments. But when she learns he is alive and continuing his work on a remote tropical island, she is determined to find out if the accusations are true.

Accompanied by her father's handsome young assistant, Montgomery, and an enigmatic castaway, Edward—both of whom she is deeply drawn to—Juliet travels to the island, only to discover the depths of her father's madness: He has experimented on animals so that they resemble, speak, and behave as humans. And worse, one of the creatures has turned violent and is killing the island's inhabitants. Torn between horror and scientific curiosity, Juliet knows she must end her father's dangerous experiments and escape her jungle prison before it's too late. Yet as the island falls into chaos, she discovers the extent of her father's genius—and madness—in her own blood.

Inspired by H. G. Wells's classic The Island of Dr. Moreau, The Madman's Daughter is a dark and breathless Gothic thriller about the secrets we'll do anything to know and the truths we'll go to any lengths to protect.
-------------------Goodreads summary

Notable Quote
Montgomery might already have a bullet in his skull. Maybe Father would kill me, too. Then again, maybe not. There were worse things on the island than dying.

Prior to reading The Madman's Daughter, I would never have said I like Gothic Horror/Thriller. Or that I read it. Or that I would consider reading it (I'm easily scared). But now? Oh hell yes. I am DOWN with this genre if it's all like Megan Shepherd's book!

There were so many fantastic elements to this book I have no idea where to start! I picked it up because I'd always wanted to read The Island of Dr. Moreau, and I figured a YA version had to be pretty awesome - plus, I'll admit that I'm buying into the hype. So many people had this book on their WoWs, or were talking about how badly they wanted to read it, and then so many people signed up for the ARC Tour, and I was like "What is up with this book?! What makes it so awesome?"

It really is a creepy tale. The idea of experimenting on animals and vivisection (live dissection) to make them talk, act and think like docile humans is enough to make my squirm; and then the details that are given just make it that much more gruesome. Megan can reeeaaally paint a picture, guys - guts and body parts and heartbeats while a scalpel is cleanly slicing through. It is terrifying and heart-pumping and awesome all at once. Like I said, I scare easy, but there's something so captivating about the writing and how each scene is described as well as how it plays into the entire story that had me absolutely riveted.

I'm not sure what it is, but female MCs are a bit of a struggle with me most times - I'm very critical of them simply because I compare them to myself and I am quite self-criticizing, no matter how often we are told not to do it. That said, I was surprised at how much I liked Juliet! She's got a fantastic personality mixed with a great heaping of strength and realism and intelligence. At the same time, I found her completely relatable in how much she doubted and yearned for love from her father and how scared she was of this madness that might be within her. She's well-rounded and well-developed and I can't wait to get to know her more through the rest of the trilogy.

Who else do I want to get to know? MONTGOMERY. In an entiiiiiiiiirely different way than I want to know Juliet though, and a whole lot less ladylike. I am so in love with this character, it is ridiculous. It's something to do with how smart and hopeless and broken he is, how he hates himself but is proud and how compassionate and caring he is towards everyone - animals and humans and the unfortunate inbetweens. Every scene between him and Juliet was crackling with delicious tension, and I can't even formulate how jealous I was of her for having his intentions. Even though he's blonde (ech...not my kind of man!) and arguably as intelligently mad as the father sometimes, I love him. All of him. Every bit. Yes.

Anyway. What was I saying? Right.

This was a phenomenal story. I haven't read the original tale, so I don't know what is taken from there or what is original or added, but I was totally taken for a ride. Things I thought would happen either didn't at all, or did in a way I never expected. Every time I thought I had something figured out, I was thrown through a loop and reminded that I am just a pawn in Megan's writing game. The pacing and tone is unreal, and I was completely, totally lost in the story. I found myself immersed with no hope of getting out until I'd read the very last word, and I have absolutely no regrets.

Here's what the magic is in this book: yes, it's creepy. It's weird to think of hybrid animals and humans, especially when there are characters who are spelled out exactly what they are (one character is a sheep + 3 rabbits and completely resembled a human. Yeah. Dwell on that). Kinda makes the skin crawl, actually. Juliet's father really is a madman, and you have no idea the extent of it (I barely believe it and I read it!). But through all this violence and weirdness, you also immensely care about everyone involved. You completely understand how the Father would think he's not mad and how he believes his experiments will improve humanity. You don't blame Montgomery for assisting the father all these years, through all the horrors. You fall in love with him, in an all-encompassing way. You want to hug Juliet to you and help her struggle her way through figuring out her Father and the island. And even though Edward is...well, I can't quite say what his placement in the story is (I had a hunch about mid-way through, but it still shocked me how everything played out!), but you still love him a little bit and want to run after him to the jungle.

Read this book, guys. I can't recommend it enough. If you're like me and think nah, I'm not into Gothic Horror - GET OVER IT. THIS IS WORTH IT.