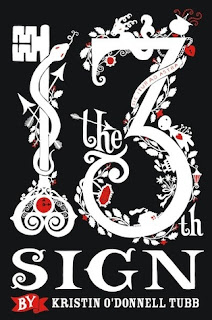 You’re no longer Sagittarius, but Ophiuchus, the healer, the 13th sign.

Your personality has changed. So has your mom’s and your best friend’s.

What about the rest of the world?

What if you were the one who accidentally unlocked the 13th sign, causing this world-altering change—and infuriating the other 12 signs?

Jalen did it, and now she must use every ounce of her strength and cunning to send the signs back where they belong. Lives, including her own, depend on it.
----------------------Goodreads summary

Notable Quote
Sometimes thinking too much could make you miss something really great. Come to think of it, I don't know that there is such a thing as a good trait or a bad trait. Every aspect of our personalities can be good or bad; it just depends on the situation. Sometimes a help, sometimes a hindrance. No absolutes.

I have a confession: I totally read my horoscope, and I 100% believe I am a token Pisces with a touch of Aries (seeing as how my birthday falls a day before the cusp, it makes sense). While I'm not entirely sure I believe in the zodiac, I can't deny how well the attributes to each sign describe me. While the daily horoscopes seem like a bunch of hooey, the overall descriptions are spot on for me, my family and friends.

Obviously, I know a bit about the zodiac signs - which was one of the reasons I wanted to read The 13th Sign so badly! But at the same time, it also made me totally resistant to the idea of adding a thirteenth sign and shifting everyone. Though I'd still remain a Pisces under the new dates if the 13th Sign did exist, I would be smack in the middle - without all my Aries tendencies. And I reject that idea!

Moving along to an actual review of the book...

Here's the sad truth: I was super excited to read this book, and I was definitely underwhelmed. It was this crazy adventure of accidentally releasing the 13th sign onto the world and changing absolutely everything; so Jalen (the unfortunate unlocker) has to defeat the traditional 12 plus Ophiuchus the 13th in order to restore order and normalcy as we all once knew. Sounds fantastic right?

It was a pretty great adventure, and I really enjoyed how Jalen had to meet each sign and how well they seem to represent the core characteristics of the sign. But cramming 13 battles amongst a real plotline into a meager 270-someodd pages left a lot to be desired. I wanted more, I wanted more detail, I wanted more action and less movement. A lot of the resolutions to the battles were abrupt and, honestly, a bit cheesy to me. There was especially one that had me rolling my eyes so hard at the pages it felt like I pulled something. I understand that not all 13 battles can be MIND-BLOWING EARTH-SHATTERING EPIC, but I expect a few of them to be at least!

I was also disappointed in the personality shifts that happen when Jalen accidentally unlocks Ophiuchus. I get why they happen, and I don't have a problem with how everyone shifts. That all makes sense. But it was so convenient what each person around Jalen turned into, and I hated that it felt like everyone else turned into a pretty big wuss. It made Jalen's "sudden" transformation into a sassy, back-talking fighter a little less impressive. They were all incredibly extreme shifts, and it was just a little too much.

I think I just wanted more from the book. So many things were touched upon - Jalen's Nina, Jalen's father abandonment issues, some vague twinges of romance with a few of the guys - but nothing really fleshes out into real plotlines that I invested myself into. The concept, the potential is totally here; but it didn't carry through.

Something I really did like was the message in the end, though. I know I've whined that some of this is cheesy, and the ending is a little bit too - but it fits. It wraps up everything Jalen and her friends have gone through nicely and gives a satisfying purpose to the whole adventure; and I love that that's what the reader gets to leave the story with. It actually made me change my star rating, because originally I was feeling like a lot of this was a waste of a day to read. But then the ending happened, and while yes it is pretty predictable, the message is clear and fantastic: no absolutes.

PS. Did you know that a 13th sign is a real debate in astrology? Here's the wiki page - I heard about it a couple years ago and have been intrigued since...but I definitely reject it!