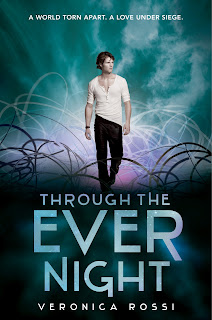 Through the Ever Night (Under the Never Sky #2) by Veronica Rossi
Harper Teen, 400 Pages
Expected US Release Date: January 8, 2013

It's been months since Aria last saw Perry. Months since Perry was named Blood Lord of the Tides, and Aria was charged with an impossible mission. Now, finally, they are about to be reunited. But their reunion is far from perfect. The Tides don't take kindly to Aria, a former Dweller. And with the worsening Aether storms threatening the tribe's precarious existence, Aria begins to fear that leaving Perry behind might be the only way to save them both.

Threatened by false friends, hidden enemies, and powerful temptations, Aria and Perry wonder, Can their love survive through the ever night?

In this second book in her spellbinding Under the Never Sky trilogy, Veronica Rossi combines fantasy and dystopian elements to create a captivating love story as perilous as it is unforgettable.
------------Goodreads summary

Seriously, who can I bribe out there for an ARC of this? Because I don't think I can wait any longer! I adored Under the Never Sky so much (read my review here!), it is easily one of my favourites and a go-to recommendation. I have to know how Aria and Peregrine are faring, and truthfully? Roar. I love him. (Also, I gushed about the cover here.) 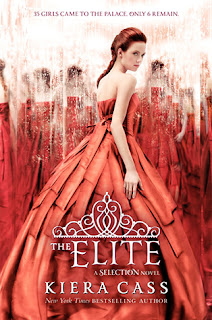 The Elite (The Selection #2) by Kiera Cass
Harper Teen, 336 Pages

Thirty-five girls came to the palace to compete in the Selection. All but six have been sent home. And only one will get to marry Prince Maxon and be crowned princess of Illea.

America still isn’t sure where her heart lies. When she’s with Maxon, she’s swept up in their new and breathless romance, and can’t dream of being with anyone else. But whenever she sees Aspen standing guard around the palace, and is overcome with memories of the life they planned to share. With the group narrowed down to the Elite, the other girls are even more determined to win Maxon over—and time is running out for America to decide.

Just when America is sure she’s made her choice, a devastating loss makes her question everything again. And while she’s struggling to imagine her future, the violent rebels that are determined to overthrow the monarchy are growing stronger and their plans could destroy her chance at any kind of happy ending.
-------------------Goodreads summary

I know The Selection got some mixed reviews anyway, and even in my own (read it here!) I was a bit torn since I can't stand America and Aspen, but adore Maxon so much. But that doesn't mean I'm not dying to know about The Elite! What is happening with the rebels? Who is Maxon going to pick? Will America ever stop being a flaky bitch and commit to someone? Must know!

What book are you eagerly awaiting?
Leave your link in the comments!

PS. Have you entered my Holiday Book Giveaway yet? It's international! Ends 11/28 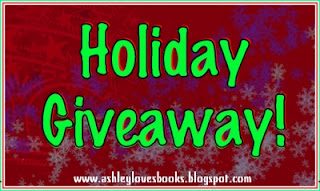