Top Ten Books I Was Dying To Read...And Still Haven't

Top Ten Tuesday is hosted by the fab ladies at The Broke and the Bookish!

This week was a rewind, so I chose...
Top Ten Books I Just HAD To Buy...
And They're Still On My Shelf.
I also had to limit it to books acquired this year, because if this were to go back into my archives...well. It's just sad how many books I've got that I've not read yet and was so sure they'd be my immediate favourites! 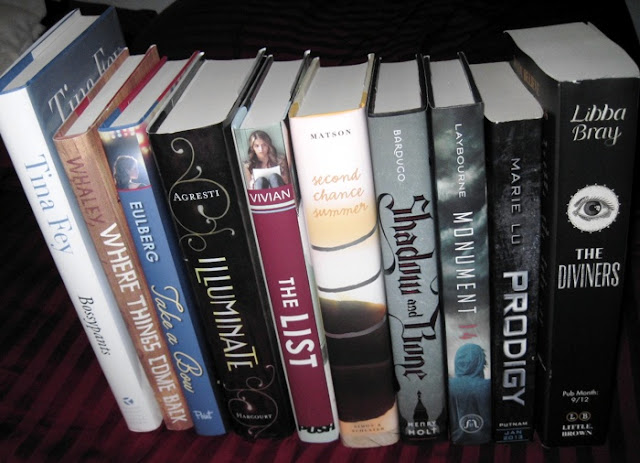 Bossypants by Tina Fey
I wanted this book SO badly it was the only one I put on my Christmas wishlist to ensure I would get it. And I did! I just haven't read it yet.

Where Things Come Back by John Corey Whaley
Hunted up and down for this bad boy, but it was sold out and waiting for the Printz stickers to be put on. The moment it was printed again, I went out to the store and got it.

Take A Bow by Elizabeth Eulberg
Illuminate by Aimee Agresti
Both are ones I wanted SO badly, I ordered them online - which I never, ever do. I'm still dying to read Take A Bow, but for some reason I keep putting it off.

The List by Siobhan Vivian
Second Chance Summer by Morgan Matson
I bought these both before they were officially available - I saw the boxes come in at BN and wheedled my way with the employees to sell them to me early.

Shadow and Bone by Leigh Bardugo
Monument 14 by Emmy Laybourne
Snapped 'em up because i'd heard such wonderful things, plus I was meeting them that night for the Fierce Reads tour. I was so so excited to read after hearing Leigh and Emmy talk about their books, too!

Prodigy (Legend #2) by Marie Lu
The Diviners by Libba Bray
Two of the Three I was absolutely DYING for at ALA - squealing and jumping actually occurred when I was able to get ARCs. And yet...still unread. Sigh.

I have a lot of work to do, obviously. Oh books, why must you all be so wonderful?!

What book did you DIE for and still haven't read?
Leave your links (to any TTT!) and I'll hop by!
Posted by Ashley @ Ashley Loves Books at 10:46 PM