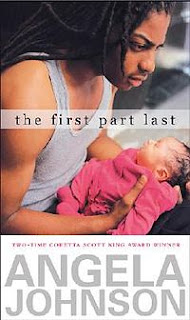 Bobby is your classic urban teenaged boy -- impulsive, eager, restless. On his sixteenth birthday he gets some news from his girlfriend, Nia, that changes his life forever. She's pregnant. Bobby's going to be a father. Suddenly things like school and house parties and hanging with friends no longer seem important as they're replaced by visits to Nia's obstetrician and a social worker who says that the only way for Nia and Bobby to lead a normal life is to put their baby up for adoption.

With powerful language and keen insight, Johnson looks at the male side of teen pregnancy as she delves into one young man's struggle to figure out what "the right thing" is and then to do it. No matter what the cost.
--------------Goodreads summary

Notable Quote
I've been thinking about it. Everything. And when Feather opens her eyes and looks up at me, I already know there's change. But I figure if the world were really right, humans would live life backward and do the first part last. They'd be all knowing in the beginning and innocent in the end.

This book can change your life in the quietest of ways, if you let it. We meet Bobby and within a few paragraphs learn two things: he's very young, and he's a father. He's just barely sixteen when his girlfriend Nia lets him know, via a red balloon, that they are going to be parents. From there, the journey escalates into unusual territory for this subject. As a general trend when dealing with teen pregnancy, we experience it from the mother's point of view. I truly enjoyed the novelty of seeing it from a young man's perspective. As a woman, I appreciated very much that Bobby wasn't addicted to drugs, homeless or abusive. He's presented as a young man who made a decision that came with a very adult consequence.

As a reader, I just found myself involved. Johnson's writing is spare, much like my own journals at that age, which lends such reality to a book that could just be a story of someone else. But it was too easy to imagine myself at that age: hormones raging, a drop of common sense and basically dumb like rocks when it came to love, lust, commitment and change.

But sweet Bobby...he means to do so well by his little girl, Feather. (side note: Love or Hate the name?) His mother has made it clear that his world has changed, that parenthood is an irreversible threshold into the universe no longer revolving around him. He's raising a little girl on his own while still attempting to go to school, have his friends and learn to be a man.

The story is framed in mini chapters flashing between Now and Then. I wasn't sure I'd appreciate that in the beginning; plots can develop manholes the size of Montana when the times flicker back and forth. That's where Angela Johnson's pure genius shines through because the major lesson Bobby, Nia, their parents and friends learn is that life has just been split into two categories: before and after.

The First Part Last, though not lengthy at only 83 pages, is definitely a book to share. It's a bit of a cautionary tale without heaping judgment on the characters. Johnson shows what it means to have your world changed and I think it's something we should all experience at least once.