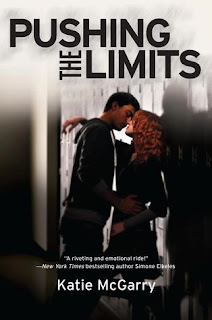 SO WRONG FOR EACH OTHER...AND YET SO RIGHT.

No one knows what happened the night Echo Emerson went from popular girl with jock boyfriend to gossiped-about outsider with “freaky” scars on her arms. Even Echo can’t remember the whole truth of that horrible night. All she knows is that she wants everything to go back to normal.

But when Noah Hutchins, the smoking hot, girl-using loner in the black leather jacket, explodes into her life with his tough attitude and surprising understanding, Echo’s world shifts in ways she could never have imagined. They should have nothing in common. And with the secrets they both keep, being together is pretty much impossible.

Yet the crazy attraction between them refuses to go away. And Echo has to ask herself just how far they can push the limits and what she’ll risk for the one guy who might teach her how to love again.
-----------------Goodreads summary

Notable Quote
Shit, what if she did trust me? What would I do with it?

I went into this novel with a lot of expectations - I heard nothing but great things about it from other bloggers, read absolutely raving reviews, and when I was at ALA this was a book everyone was speaking of. High expectations, lots of potential to be let down.

But I wasn't. Oh, I absolutely was NOT.

I don't know if I'm as stark raving mad about it as a few other reviewers, but I can tell you that everything you've heard is absolutely true. This story is gripping and gut wrenching and just rips your heart to shreds at the same time as filling it to the brim. There's emotion dripping off each page, angst and real heart in every word. This is a story worthy of the heartsickness it will cause.

First and foremost, we have to discuss Noah. Oh, Noah. If ever the prototype bad boy to fall for, it's him. And while I totally get all the swoonage for him, he just didn't do it for me - but that's entirely a personal thing. I think my bad boy will always be the Will from Infernal Devices; he's snarky and rebellious for half-pompous and half-noble reasons. Noah's a bad boy because he actually does bad shit. And even if most of it comes from a good place or with good intentions, it's still bad. Regardless, I found myself falling in love with him, too. He's so hard and vulnerable at the same time, so filled with love and anger that he's this passionate guy with aggression as the only way to express it. Something I loved with him is that I never doubted his capacity to love Echo. In some bad boy characters, they're just so hard-hearted and cruel that I think the love story is forced - but not with Noah. His fists fly, but his heart is huge, too, and there's no way to resist that.

Echo was a little harder for me to love, but I can't quite pinpoint why. I think I just wanted to shake her and tell her to man the hell up. She was a little too weak for my tastes. And while I can get why, her progression just wasn't fast enough for me to love. Still, her character is great, and everything she's endured makes how tentative she is easily understood. I'm probably being quite cavalier saying she should be stronger, actually, because the crap she's gone through with her mom, and not being able to remember it...well, I'd probably be crumbling in a corner. And that she's just lost her brother in Iraq on top of that all? I couldn't survive that.

There were a lot of elements of this story that surprised me. All I'd ever heard was the smokin' hot boy and their smoldering romance - and yeah, that's definitely what I focus on. But there are smaller details that I truly loved, too. Like why Echo is named that, and her brother being named Aires. Or the friendships - or lack thereof, when it comes to that heinous bitch Grace. I hated her. But the friends that did stick by Echo in the aftermath, and Noah's friends...those are friendships worth fighting for. Or Aires, who was an element I was completely taken aback by - we know my military hangups, and it made it that much harder to read because there was one specific scene that just...killed me. I literally dropped my iPad and started sobbing because it is a thought that haunts me.

But what I did love was how real the hurt was throughout this book. It's tough to see some of these things written, even though I've never experienced anything like what Echo or Noah have gone or go through. It's a lot of those inner fears and thoughts we can't admit to having, because we're afraid that will make them true. While it made it difficult to get through, it also made it impossible to put down.

My favourite character? Mrs. Collins, the counselor. Hands down. She was batshit crazy (driving, especially - loved all those moments in the car with Noah!), but she was a good woman, and I loved her belief in Noah and Echo. In a book where all the adult characters probably deserve a good room in hell, she was a breathe of fresh air with a side of funny, too.

One question. Why did the horrible babysitter-turned-stepmom have to be named Ashley?! I mean, really.