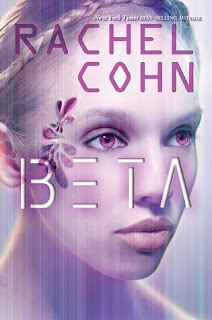 Elysia is created in a laboratory, born as a sixteen-year-old girl, an empty vessel with no life experience to draw from. She is a Beta, an experimental model of a teenage clone. She was replicated from another teenage girl, who had to die in order for Elysia to exist.


Elysia's purpose is to serve the inhabitants of Demesne, an island paradise for the wealthiest people on earth. Everything about Demesne is bioengineered for perfection. Even the air induces a strange, euphoric high, which only the island's workers--soulless clones like Elysia--are immune to.
At first, Elysia's life is idyllic and pampered. But she soon sees that Demesne's human residents, who should want for nothing, yearn. But for what, exactly? She also comes to realize that beneath the island's flawless exterior, there is an under-current of discontent among Demesne's worker clones. She knows she is soulless and cannot feel and should not care--so why are overpowering sensations cloud-ing Elysia's mind?

If anyone discovers that Elysia isn't the unfeeling clone she must pretend to be, she will suffer a fate too terrible to imagine. When her one chance at happi-ness is ripped away with breathtaking cruelty, emotions she's always had but never understood are unleashed. As rage, terror, and desire threaten to overwhelm her, Elysia must find the will to survive.

The first in a dazzlingly original science fiction series from best-selling author Rachel Cohn, "Beta "is a haunting, unforgettable story of courage and love in a cor-rupted world.
-----------Goodreads summary

Notable Quote
Places that used to be nothingness are somethingness now.

Rachel Cohn is one of my favourite YA authors. Ever. She is an instant read for me, without question. I don't even have to know the synopsis or anything about the book - if her name is attached, I want it. Nick & Norah's Infinite Playlist is the YA book that got me into young adult literature, Dash & Lily make me warm and fuzzy just thinking about them, and her Gingerbread/Shrimp/Cupcake novels are the only contemporary books I've ever really supported as a series. So when I heard of Beta? I. Am. On. It.

Maybe I just have too high expectations for a Rachel Cohn book (because let's face it, I worship the literary ground she writes upon), but Beta left me so disappointed. I wanted to like it - I really did. And I still love the concept of it. But so far? Not feeling it.

Oddly, it's hard for me to pinpoint exactly why I didn't like the book, other than I just wasn't interested. It took me over halfway through the book to really care what was going on; and even then, it was just a little boring. I had no investment in any of the characters, and I never connected with anyone in the novel. There are scenes that are meant to be exciting and dangerous, but it always felt a bit dull to me. Without trying to make a pun on the fact it's a book about clones, there seemed to be a distinct lack of life to this novel.

I actually think my issue is the same one reason I have a hard time reading about anything time travel: loopholes. Things just don't seem to match up in time travel books to me; there's always something that doesn't make sense or I don't think is plausible. For a lot of Beta, I felt the same way. Elysia being a "feeling clone" was just a little too handy sometimes; and other times, I felt she was too clone-like in her thoughts. I know there has to be a transition from just clone to feeling clone, but I wasn't satisfied with it. Not yet, anyway. It did pick up towards the end, when she fully embraced that there may be something defective about herself and what that meant to her and her lifestyle.

The love interests themselves weren't very interesting, but the parts they each played in the big "twist" that happened - that was something I really liked. I like that their function is more than just a distraction or love - they have a real purpose, a real part to the grand plot, and I can't wait to find out more about each one. I am also very taken with the idea that Teen Betas are created from real people, that they are basically "recycled" from a real person that has passed. I can't quite say too much on the topic without giving away a substantial section of the plotline, but it's a great element and has a lot of potential. While so far I don't see a lot of that being put to use in the story, I do have a lot of hope it'll come to play in the coming books. And based on the ending of Beta...it definitely will.

I'm also trying to sort out how I feel about Ataraxia, the drug used in Beta. It's basically the hybrid version of X and Steroids - and while I get the function of it in the novel, for some reason it sits weird with me. I don't know if I'm just suspecting it will have a larger part to the plot, or if something just feels off about it, but there's something about it that's tickling my brain. I don't have issues with drug uses in novels as long as it makes sense - and it definitely does in this, especially on an island engineered to be perfect - so I don't think I'm just being a prude or uptight and am thinking 'oh no, drug uses with teens!' or anything like that. Maybe I just missed something while reading, but I feel like I need to read more about it. I could be way off, I'm not sure - but it feels like I'm not.

Even though the majority of this novel didn't hold my attention, there is something I really liked: the uprising. The bigger happenings. Just what it means that Elysia is a feeling clone, a Defect. There's a bigger world going on past the limits of Demesne, more to this series than just following some teen who realizes she's feeling shit and having emotions -- and I LOVE what it feels like it could be. Beta wasn't that high on my list, but I am definitely interested in reading the second book because I want to know what's going to happen with this bigger picture and retaliation. I'll probably go into Book 2 with a little more reservation than I did with Beta, but I know I'll still be there.