One of the things I love about living in San Diego is that we have a surprisingly (to me, anyway) large amount of local authors. I totally get why, since San Diego is where it's at. *flips hair* 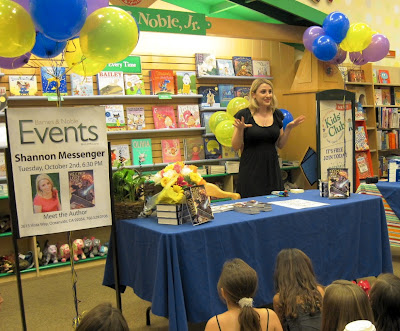 But really. I am lucky to live within distance of so many talented people and get to meet fab authors and writers at events. Shannon Messenger was someone who's MG book Keeper of the Lost Cities I'd heard a LOT about - and I may have gushed just a smidge when I saw and met her at the YA or Bust event. Since then, I've had the pleasure of seeing her at a few more events, and she is always the cutest, sweetest, bubbliest person ever. So when I found out Shannon was having her launch for Keeper at the Oceanside BN, there was zero question that I would be there!

The entire event can be summed up in these words: So adorable and fun! 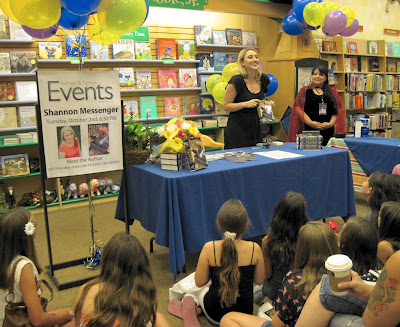 This is the first event I've gone to for a middle grade book (I don't think those happen often...anyone know?), so I admit to having to adjust to having so many kids running around. Full disclosure: children make me nervous. I just don't know how to talk to them! I will either baby talk to a 15 year old, or start chatting about college classes and textbooks to a 4 year old. It just doesn't work with me.

But! Seeing adorable middle schoolers talking so excitedly with Shannon about her book? Totally worth it. Shannon's face was so lit up, and the kids were so engaged and into the story...that is a total dream for an author, and getting to witness it was pretty magical. It makes me excited for the hopeful one day I will get to talk to someone who has read something I've written.

Also: one of the best set ups for an event ever! Shannon's family had brought tons of balloons, and she went all out with a fantastic baked goods spread (I chose the rice krispy treat over the ginormous cupcakes - delicious!), plus had a bunch of amazing goodies to give away or hand out...she knows how to do a Launch right!
It started with Shannon discussing who she is and giving a small summary of Keeper, and after she read aloud a scene (if you've read it, it's the scene with Keefe!). There was a small bit of time after she finished reading an excerpt, so she answered questions - and let me tell you, it was mostly children asking her questions and it was so freakin' adorable I just wanted to squeal! There was a massive line for signing at the end, but that was fine for me because I was in line with Andrea Ortega and Amy Tintera and got to chat with them.

As per my usual event recap posts, let's do a bullet list!
So yes, definitely one of the best events I've been at - and possibly the best in terms of cuteness! I'm so happy for Shannon to get to see her book out and interacting with children who have read it. While I have not yet finished my ARC, I am about 50 pages in...and I seriously love it so far!
I love doing these events, especially since I got to see a bunch of writer/author/reader friends that I don't normally see. Anyone coming to YA in the Sun? Because that's where we'll all be next!

Have you read Keeper of the Lost Cities?

*Photo Disclosure: I did my best to choose photos that didn't show any of the children's faces - if you are the parent of any of these kids and are uncomfortable with the photo being on my page, please contact me and I will remove ASAP! Thank you!
Posted by Ashley @ Ashley Loves Books at 12:09 AM