The last few weeks of August, I did this thing (privately, not on my blog) where I made a small pile of books that I wanted to read. Not ones I felt I had to, but the ones that I really wanted to. Some of them were new releases, others were older, some were ARCs releasing soon, and still some were ARCs of later releases or earlier ones. The point of it was that I got to see a pile of books that I was excited for, not so much an obligation - and surprisingly, it worked really well! I finished most and at least started the rest, and it reinvigorated my reading mojo.

So I've decided that I'm going to try that again! And this time, publicly declare it on the blog :) Hopefully I'll stick to it better, but I'm trying this as a "no pressure" situation - if I read the book, cool. If I don't get to it, that's cool too.

I'm kind of cheating in that I prepped for this post a few days ago, and since then I've finished a few of these books already. But they started in my September pile and are in the pictures, so let's stick with it! 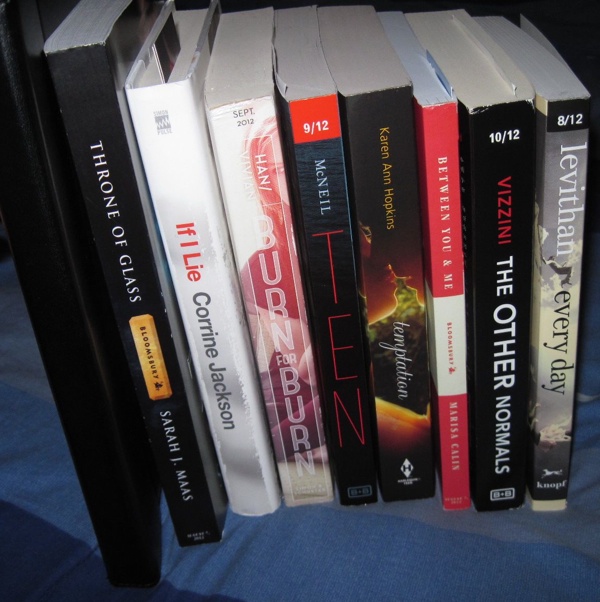 In Progress:
The Other Normals by Ned Vizzini
Meant To Be by Lauren E. Morrill*
Temptation by Karen Ann Hopkins

To-Read in September:
Burn For Burn by Jenny Han & Siobhan Vivian
If I Lie by Corrine Jackson
Between You & Me by Marisa Calin
Every Day by David Levithan
Butter by Erin Jade Lange*
Unspoken by Sarah Rees Brennan*

*represented by the iPad in the picture, since they're from NetGalley!

Tell me, have you read any of these? Loved them? Hated them?
What are you reading this month?
Posted by Ashley @ Ashley Loves Books at 8:00 AM