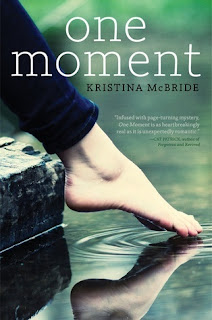 This was supposed to be the best summer of Maggie's life. Now it's the one she'd do anything to forget.

Maggie remembers hanging out at the gorge with her closest friends after a blowout party. She remembers climbing the trail with her perfect boyfriend, Joey. She remembers that last kiss, soft, lingering, and meant to reassure her. So why can't she remember what happened in the moment before they were supposed to dive? Why was she left cowering at the top of the cliff, while Joey floated in the water below-dead?
As Maggie's memories return in snatches, nothing seems to make sense. Why was Joey acting so strangely at the party? Where did he go after taking her home? And if Joey was keeping these secrets, what else was he hiding?
--------------------Goodreads summary

Notable quote
There was so much that I suddenly needed to uncover, no matter the cost. Because learning all the things I didn't already know, finding a few more slices of life when Joey was with us, even if it only helped for a little while, was the only way I could cheat my way out of his death.

Once upon a time, a girl was getting ready for bed around 3am. She saw her iPad on her nightstand, knew there was a book on it that she wanted to read and thought to herself, “Well, I don’t have anything to do tomorrow, I’ll stay up to read just one or two chapters. It’ll be fine.” So this girl did…chapter one flew by. And chapter two. And three, and four, and five…and suddenly, it was 6am and she flipped the last page feeling all sorts of sadness and tragedy and anger and mixed emotions.

I am STILL trying to get back on a regular sleep schedule, FYI.

One Moment seems to be about the tragic loss of Maggie’s boyfriend, the result of a terrible accident on the cliffs, and the known secrets of their relationship. And of course, it is – but I think it’s more about friendship. How friendship can exist, how it functions…and a much darker side. How friendship can actually bind a person, how it can become a limitation or an obligation. How ultimately, a friendship can lead to deception or tragedy.

I know that paints a bleak picture, but One Moment had a depth that took me completely by surprise. I knew it would be sad – it’s about the death of a girl’s boyfriend! – but I had no idea the extent of it. The unraveling and the twists and secrets.

I’m really sad I lost my notes while reading when it was archived before I could email them – there are some pretty good gems there, in my opinion. Usually “OMG I HATE HER” and “OMG I HATE HIM” and “WHAT.” You get the idea.

While the story itself isn’t the most original, and a lot of the plot twists were kind of expected or at least not outside the bounds of consideration, I admit that there were enough twists or unexpected moments that were SO good, I barely even minded. I don’t know if it was the late night, or the ability of the story to just consume you entirely, but I was absolutely riveted to the pages. I had to know, and I had to know NOW.

Let’s talk characters. This book revolves around the tight friendship of 6 people – and at first I was weary of that. That’s a lot of personalities, thoughts, and emotions to handle – but it was never a problem for me. It’s very clear who we are with at the time and who feels what. Of course it was mainly about Maggie, Adam, Shannon and Joey; the remaining two were focused on very little – but that’s fine. They didn’t necessarily have to be. Adam was far and ahead my favourite character – not only do I kind of love him for what he is and does (distancing tendencies and all!), but I felt like he was done so, so well in the book. He’s given to you, and even though you immediately feel like you know him and can love him, he’s slowly revealed and peeled back in his own way. We gradually get inside his head and his actions, and I fell for him hard. Maggie, on the other hand, was frustrating. Her character is supposed to be, I think, but there are some moments where I just wanted to tell her to get there quicker. To stop being so naïve. To UNDERSTAND. Sometimes, it was just so obvious and I hated that it dragged out.

And even though I actually hated Joey, I admit that he’s done really well. The reader never questions Maggie and Joey’s relationship, we even understand how it’s perfect and think it is, too! And then shit goes down. And shit happens and shit is revealed, and more shit is tossed in just to mess it all up. And even though there’s all this messy shit going on, I still kind of liked Joey. Inexplicably, and I think most probably won’t. But how he’s written…it works and it makes sense for me, even though he’s completely shit-tastic.

(How many times can I curse in one paragraph? I know.)

One Moment was a riveting read for me, even though some of the characters are questionable and a lot of it is predictable. Somehow, the effect as you read is completely consuming, and the only solution is to just read on. I would have given it 5 stars, but here’s the thing (no spoilers, I promise): the ending is exactly as I knew it should be. And even though I enjoyed how we got there immensely (it could have wrapped up about 30 pages earlier, in my opinion), it wrapped so neatly into the way I thought it should from the beginning that it felt very underwhelming. Despite being twisted, torn and tugged through an emotional mess.