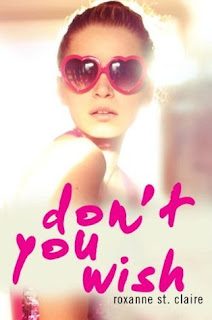 When plain and unpopular Annie Nutter gets zapped by one of her dad's whacked-out inventions, she lands in a parallel universe where her life becomes picture-perfect. Now she's Ayla Monroe, daughter of the same mother but a different father—and she's the gorgeous, rich queen bee of her high school.

In this universe, Ayla lives in glitzy Miami instead of dreary Pittsburgh and has beaucoup bucks, courtesy of her billionaire—if usually absent—father. Her friends hit the clubs, party backstage at concerts, and take risks that are exhilirating . . . and illegal. Here she's got a date to lose her V-card with the hottest guy she's ever seen.

But on the inside, Ayla is still Annie.

So when she's offered the chance to leave the dream life and head home to Pittsburgh, will she take it?

Notable Quote
You know, you might be one of the luckiest people in the world. You get to see both sides and make a choice.

Random House is one of those publishers I trust implicitly to put out fantastic books, especially the Delacorte imprint (hello, Wanderlove is one of theirs! Instant trust). So while I had reservations that Don't You Wish would be predictable, I went ahead with it anyway. Though I do think it was on a few things, I was surprised by the plot layers and quite glad to have picked it up!

The story opens with Annie Nutter, in a rather heartbreaking scene exemplifying how she's unpopular and a bit plain and awkward. Even though her family was trying to be set up as embarrassing and unorthodox, I actually found them to be quite endearing - the imagery was great with her inventor dad and gross little brother. I felt like I could picture all the "Nutter Clutter" in the house, her mom's exasperation with Mel Nutter, all of it. I do think that I saw it in an endearing light because I'm older though; if I were 15 and the Nutters were my clan, I'd probably be ashamed of them as well.

Through a quick and slightly confusing event, Annie wakes up the next morning as Ayla Monroe, fantastically wealthy queen bee at her private academy and Grade-A Bitch. Though she's got the same mother, her father is different, and that's what's changed her story. I was pleasantly surprised how they set up Annie's "alternate" life - it wasn't just some typical "wish I had a different life" and POOF! situation; it was thorough, reasonable, and thought-provoking. I mean, how different would your life be if your mother ended up with a different guy? It's an interesting area to explore.

Truthfully, I'm not really a fan of either Annie or Ayla - both have a lot of flaws that never really turn better. And while normally I wouldn't be put off by negative facets (we all have them, it'd be quite horrible if I held it against her), I just felt like she was missing redemptive qualities. She didn't seem to grow as well as I would have liked, and what little she did seemed a bit abrupt or forced. The polarity between her two lives was also one of the areas I felt a bit predictable and extreme; some of the situations felt far-fetched or obvious.

I'm also split on the secondary characters. I really liked Annie/Ayla's mother, she was fabulous in both universes - I can picture her as a real mom. Even though I hated Jim Monroe with a passion, I liked his character and how he was built; he's almost like Professor Umbridge from Harry Potter: you hate her with a passion, but kind of admire how horrible she is. Trent turned out to be ok, but I didn't ever come around on Theo. Lizzie was an ok best friend: faithful and true, but lackluster. I could NOT stand Jade, Bliss, or Ryder though; they were all so one-dimensional and flat I wanted them to shred them up. They were just a little too easy to dislike, you know?

However. Charlie Zelinsky? YES. I loved him. I 143'd him (get it?!). I liked how we got to know him, how little bits were revealed as we went along, how he turned out to be this lovable geeky dude with a heart and a purpose. Sometimes he's a bit too perfect of course (did he even have a flaw?!), but amongst all the other characters, he shined brightest. There is another character I liked too, but...I can't say about him/her/it/mysteriouscharacter without minorly spoiling something, so just rest assured that there is one more redeeming person/place/thing/generalnoun.

Something entirely surprising about the book was that Roxanne St. Clair actually explained the alternate universe - definitely did not expect that! Sometimes I felt like it was out of place, because the summary and overall tone seems like some social commentary on the rich not being the happiest or things like that, and then BOOM: science. But really, I loved it. I loved that the plot took all it's time to actually explain a possibility, to really explore how an AU could happen. I'm definitely nowhere near understanding the physics of it, but it was approachable and explained well. I'm not sure I'd have been interested in it as a young reader, but right now, I thought it was unexpected and fresh.

Overall, Don't You Wish was a bit predictable and a little flat on characters; but there were enough plot lines and moments that surprised me entirely that I enjoyed it quite a bit. If you're looking for a small twist to the normal "I wish I were someone else" story, check this one out.