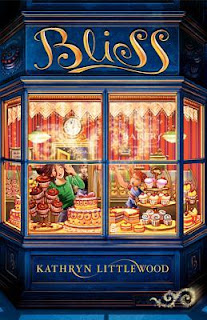 Rosemary Bliss’s family has a secret. It’s the Bliss Cookery Booke—an ancient, leather-bound volume of enchanted recipes like Stone Sleep Snickerdoodles and Singing Gingersnaps. Rose and her siblings are supposed to keep the Cookery Booke under lock and whisk-shaped key while their parents are out of town, but then a mysterious stranger shows up. “Aunt” Lily rides a motorcycle, wears purple sequins, and whips up exotic (but delicious) dishes for dinner. Soon boring, nonmagical recipes feel like life before Aunt Lily—a lot less fun.

So Rose and her siblings experi-ment with just a couple of recipes from the forbidden Cookery Booke.

A few Love Muffins and a few dozen Cookies of Truth couldn’t cause too much trouble . . . could they?

Notable Quote
Thee was a magic in the two of them sitting there as the brilliant orange of the setting sun glimmered through the trees, but it had nothing to do with spells or mason jars. It was the magic of a person's ability to change, to grow, to heal, without the aid of any magic at all.

This is definitely a MG novel for the true middle grade readers. You know how some MG books can transcend age groups, kind of blur with YA books (all 3 of Rick Riordan's series, Shannon Messenger's Keeper of the Lost Cities, etc)? Not this one. It's for the young readers, and unless you have a distinct liking for Middle Grade books, you might want to pass this by.

Lucky for me, I do have an affinity for MG books, so it didn't bother me! I just had to constantly remind myself as I was reading that this is for the younger set, that the main character is young. The writing is fantastic, incredibly easy to read and approachable to a young set. I loved the language in the book, it was that nice balance of being young but still educational with some "big" words being used and explained. It was clever to focus on a family with several varying ages, because it allowed certain elements to be explored further or elaborated on.

Can I tell you how much I love books that focus on family? I feel like there are so few in today's books (I know that's not true, but still) and it was wonderful to see one that allows a true family unit, one that works together and places value on each other. The dynamic between all the siblings and the parents is great, and I really loved seeing them work through problems together. And that Rose wants to stay with her family, loves them and understands how they're a support system? That's definitely something I would want my kid to read and emulate. Her siblings are all great characters with their own distinct set of skills and personality. I loved how Ty was a little bit narcissistic, that Sage was the bratty younger brother but quite brainy, and even little Leigh, small as she is, has a developed personality trait too. And how much do I love that they're all named after herbs?! Rosemary, Thyme, Sage and Parsley.

Rose is a perfect middle grade character, too; she's at that weird time of growing up where she's trying to figure out who she is by herself as well as who she is within the world. She struggles with a blossoming crush who doesn't know her name, wanting to be something but not knowing quite how to get there, and feeling like she's not really being seen. At the same time, you can tell how strong she is and how much potential there is to her; she's dedicated, loyal and fiercely protective of her family. She loves them no matter how much she feels like they overlook her, and I love that. If I had a little girl, I would love for her to befriend Rose.

The recipes and mischief the Bliss family get into are also fantastically fun and magical, and the wording of the recipes is definitely unique - the book has it's own sort of language, but it's easy to understand and follow along. All the trouble and chaos the family creates through their recipes are such an adventure, and I had a lot of fun reading about the problems and finding out how they would try to fix everything. I usually call books like this predictable, but I can safely say that I didn't know what Rose, Ty, Sage, and Leigh would get themselves into next!

There were a few things I didn't like though. While I didn't predict what the Bliss family would do next, I wasn't particularly at the edge of my seat, either. It wasn't the most action packed book - though the action that was there was breathtakingly amusing - and sometimes I felt like the story dragged on a bit. I appreciate the focus on Rose and her growth, but there were a few instances I felt she could have come to conclusions faster. It wouldn't have been outside her character parameters or potential. The use of modern references (Justin Bieber, for one) was also a bit odd to me; the setting and plot of the book feel so magical and otherworldly, having real world references kind of shattered that illusion. It's this fantastically fantastical world where magic in cookies can make people tell the truth, where love exists and bikes are ridden to town squares and breathe of people who tell no lies can be captured in a mason jar...it feels like this great dream world, and then something real would come along and break the spell. Personally, it felt out of place and a bit disappointing that this could be a real town somewhere.

Also, be warned that this is book one of two (I think two anyway, I haven't seen anything about a third one!) - it would have been nice knowing that going in! I wasn't really noticing it for the first half of the book, but as it went on I was definitely thinking, "Hmmm there's only a small chunk of pages left how is this going to wrap up?!" And about 5 pages before it's end I realized OH. Maybe this isn't really the end! and sure enough, there's a book 2. While I do like the ending to this book - it was satisfying and complete while still having a great setup for the next part of the story - I would have liked knowing that heading in. Having a second part doesn't necessarily make Book 1 any worse or difficult, but it did explain the pacing and might have lessened my distraction.

Still, this was a magical story, and sometimes it felt like a fairy tale. I especially liked how the villainess wasn't quite villainous throughout the entire novel; it's brilliant that we find Aunt Lily to actually be kind of likable. I don't blame Ty or Sage for being swept up in her beauty and magnetism, I'm not sure I'd have seen through it either! The subtle little doubts from Rose were great though, and just enough to make you wonder who Aunt Lily really is. It's a great way to make the reader really feel a part of the story.


Though it's not perfect, Bliss is a magical Middle Grade novel filled with some great mischief, better characters and a perfect main character. This is definitely a family and bakery with which I would want to sit in and share a pie.

PS. Isn't it the most magical, delicious looking cover ever?! I wanted to eat so many pastries, cakes, cookies and tarts after finishing this book it was absurd! I'm lucky I don't eat donuts, eclairs, or scones, else I'd have been in some major trouble.

Posted by Ashley @ Ashley Loves Books at 1:00 AM