Review: Under the Never Sky by Veronica Rossi

**Thanks for entering my giveaway, entrants! Winner will be announced Tuesday morning :) 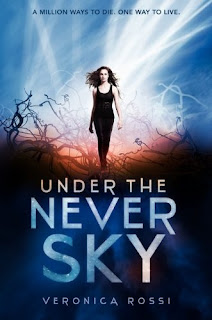 Since she'd been on the outside, she'd survived an Aether storm, she'd had a knife held to her throat, and she'd seen men murdered. This was worse.

Exiled from her home, the enclosed city of Reverie, Aria knows her chances of surviving in the outer wasteland - known as The Death Shop - are slim. If the cannibals don't get her, the violent, electrified energy storms will. She's been taught that the very air she breathes can kill her. Then Aria meets an Outsider named Perry. He's wild - a savage - and her only hope of staying alive.

A hunter for his tribe in a merciless landscape, Perry views Aria as sheltered and fragile - everything he would expect from a Dweller. But he needs Aria's help too; she alone holds the key to his redemption. Opposites in nearly every way, Aria and Perry must accept each other to survive. Their unlikely alliance forges a bond that will determine the fate of all who live under the never sky.
-------------------------Goodreads summary

Notable Quote
“I’ve never felt that way. We don’t have fear like that. But if those two things are different, then there has to be more, right? Other things besides fear and rocks that are different in the real?”
Perry nodded absently, imagining a world without fear. Was that possible? If there was no fear, how could there be comfort? Or courage?

How did I not read this novel sooner? I feel like I’ve been empty before having this story in my life.

It took me a little time to get into the book, but that wasn’t the fault of the story; I was in a bit of a slump, it’s been busy, I was in the middle of reading 3 other books, and I was feeling really heavy after a string of very dark, depressing books being read…it was basically set up to fail, which makes me appreciate this book so much more for not only bringing me out of that, but also far exceeding every expectation. And trust me when I say I had a lot of them, because all I’d heard was how amazing this was.

I remember thinking from the beginning how smooth the writing is, how easily it was to fold into this post-Unity world and accept it as real. Veronica Rossi’s writing is seamless, flawlessly swirling words around you and giving an easy pathway into Aria and Perry’s lives.

As soon as I hit page 100, I was in this book for the long haul. I was so completely wrapped up in the story the only way I set it down was when I fell asleep (it was 5am, give me a break!) and it fell out of my hand. The world within is captivating, and I felt like I could look up and see the Aether in the sky, and I found myself wishing I was some sort of Scire, hypersensitive and feeling the world in more ways than I can initially see.

For a long time I’ve seen bloggers and reviewers say that Aria and Peregrine are some of their favourite characters, and I completely agree. It’s amazing how personally attached I feel to each of them, how real they feel as people to me. The descriptions of more than just their looks, but their thoughts, actions, struggles, battles (internal and external) just shaped them perfectly. I’ve been a trained journalist for 11 years now, and if ever an example of being shown a story, not told – this is it. I adore them as individuals, and I love them more working together.

Even the characters other than Aria and Perry are fantastically done, filled with such distinction and definition that I could hardly believe when I’d glance up from a page and realize they’re just part of a story. I’m still partly convinced they do exist, in some other Realm. (And yes, I would totally fall for Roar. Right after Peregrine.)

There’s really nothing negative I can find about Under the Never Sky. It’s compelling and original in the most entertaining way, and I just want to devour everything about it. Veronica Rossi is a master at playing you as a reader, having the quiet, intense moments balance so well with the high-intensity, action-packed ones – both of which appear in just the right amounts. I was so glad it left off on a hopeful note as well, because something I can’t stand is leaving a book feeling bleak. Now, if only Book 2 could release like…yesterday. I’d be happiest then.