Review: There Is No Dog by Meg Rosoff 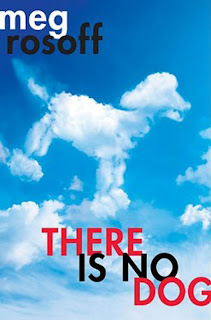 Meet your unforgettable protagonist: God, who, as it turns out, is a 19-year-old boy living in the present-day and sharing an apartment with his long-suffering fifty-something personal assistant. Unfortunately for the planet, God is lazy and, frankly, hopeless. He created all of the world's species in six days because he couldn't summon the energy to work for longer. He gets Africa and America mixed up. And his beleagured assistant has his work cut out for him when God creates a near-apolcalyptic flood, having fallen asleep without turning the bath off. There is No Dog is a darkly funny novel from one of our most delightfully unpredictable writers.
------------------------Goodreads summary

Notable Quote
Perhaps the way to proceed is to think of life on earth as a colossal joke, a creation of such immense stupidity that the only way to live is to laugh until you think your heart will break.

What a bizarre book. In the best way possible! But still bizarre. I hate to quote the blurbs on the back, but it really is this quirky, funny little read.

I absolutely loved the premise: God is actually a 19-year-old impulsive, bratty boy named Bob whose every emotion alters the state of Earth. Floods, earthquakes, beautiful weather, everything is a direct result to his feelings. (Isn't that terrifying?  What if your moods effected the weather??)  The story follows Bob when he falls in love with Human Lucy, and all the other god-like presences behind Bob that make it all work.

Has this book been banned? Because if it hasn't, I'm surprised, and pretty certain it will come. It questions God and the perceptions of God, which only makes sense that some places would ban it. I mean, if we can ban books that talk about burning books or Quidditch-playing wizards, I'm certain we can ban a book that views God as an arrogant, nymphomaniac prick, and Earth as a company-like gambling stake to be made.

There Is No Dog isn't meant to be some anti-Christian book though; in fact, it's almost an advocate for the belief in a higher being.  And I keep mentioning this religion thing like it's a religious book of some sort - it's really NOT. It's just a fun novel that happens to merge the perceptions of a religion with adolescence. Some parts were a bit out-there and confusing, and I was definitely not a fan of Bob; but overall I was laughing and enjoying all the antics, I felt sympathy for Eck (the odd penguin/anteater hybrid pet of Bob) that he was doomed, I really felt everyone's turmoil and questions.  Though it may not seem it, this is definitely a Young Adult book that lingers into the emotions of new love, figuring out who we are and who those are around us, and how it all works together to create our lives.

There's a lot of little sub-stories throughout this book; all of them weave together at points, but it is a lot to keep up with. But each one is unique and interesting, and I was entirely invested in all of it. I think Mr. B was my favourite, in his quiet, steadfast and hopeless way.

Warning, all: it's about to get weird here. Because I'm going to liken my reading this story to reading Kafka's The Castle. ("KAFKA?!" I know. Hear me out.)  I read The Castle for my high school senior final thesis, and like all of Kafka's work, it is rife with symbolism and weirdness and simplicity that's just a metaphor for complexity. And truthfully, I felt that way with this: it's a quirky read, it's funny and flowing--but I also felt like I could read into every character and event and make it something bigger.  Am I supposed to? I have no idea. But I could.  And I felt like it made this book all the better.

I'm not sure if this is for everyone. It's a bit weird to wrap your head around the concept of God not being the all-mighty-all-power-all-knowing benevolence, and even weirder to not quite like him at all. But I think everyone should give it a shot, because they'll probably find a little of their own faith in it.