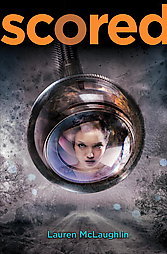 Set in the future when teenagers are monitored via camera and their recorded actions and confessions plugged into a computer program that determines their ability to succeed. All kids given a "score" that determines their future potential. This score has the ability to get kids into colleges, grant scholarships, or destroy all hope for the above.Scored's reluctant heroine is Imani, a girl whose high score is brought down when her best friend's score plummets. Where do you draw the line between doing what feels morally right and what can mean your future? Friendship, romance, loyalty, family, human connection and human value: all are questioned in this fresh and compelling dystopian novel set in the scarily forseeable future.
-------------------Goodreads summary

A very common theme throughout this entire review is going to be seeing both sides. When I first read the book, I had very strong feelings on what the book could be; as I was reading I had intense conflicting emotions; and even now, as I sit here and try to review it, I'm still a little conflicted, sitting in a very, very grey area.

On one hand, I'm really surprised this book hasn't been more talked about; there was little fanfare that I could tell when it was released, and it still doesn't seem to have much.  Which is odd, because I feel like the premise of it is something people could really grasp onto: it's a not-so-distant future where kids are watched and scored in every aspect of their life. The higher the score, the more opportunities and the "better" you are to society; the lower the score, the less you have at your disposal -- and heaven forbid if you are an unscored. Does that not sound a little like our present anyway?

At the same time, I'm not surprised that this book isn't discussed more, but that's for more conspiratal reasons: it questions a lot of systems we have in place, are trying to put in place, or may end up with in place at some time -- why would we try to raise an awareness about that? Why would we try to get readers and people to question something that's not quite there yet? It's a political book in a lot of ways, and that's always a fine line to tread.

The entire first half of the novel all I could think was, "Oh my God this is No Child Left Behind on crack, why am I reading about something I don't support?!" And when I finally read it mentioned in the book, I had that self-satisfied feeling in the pit of my stomach; that quickly turned to a deep dislike of this whole Scored society.  I'm not going to get into a whole spiel how I disliked the society because it will turn into a whole political thing about my stance on NCLB and a raving rant about how you can't possibly have a numerical value placed on every child and measure it as a nation. But I will say how it made it a little difficult for me to read the book because I did have such a strong reaction to this. The entire Scored society really is like a NCLB version jacked up and cracked out, and I absolutely hated it and hated every defense of the "scored" that the book had.

But here's the thing: that's exactly why you should read this book. If nothing for the sheer terror that it will incite in a person at the prospect of having "eyeballs" watch you and scientifically learn about you at every breathe you take, step you take, thought you think and thing you do. Or maybe you'll end up liking this Scored society, and it will incite you to start working towards ScoreCorp and having a society that numerically and algorithmically measures you. I personally don't want to know if that happens in you because we will have a raging fight, but that's the beauty of the book: it definitely could make that happen.

From a purely reviewer perspective rather than an overly-emotional reader, I do have to say that a few points of the book disappointed me. The romance was a bit stretched and unsatisfying, though I quite liked Diego as a whole. I was very into the idea of how opposites they were in multiple ways; I just wish it had been done a little better. I also felt like some of the secondary characters were one-dimensional; a few of them need to be, but it still felt like they were there for Imani's function and nothing more.  I felt like the last 30 pages were a bit of a letdown to the buildups. And truthfully, a lot of the book did feel like I was reading some heavy propaganda. It's not an easy book by any means, and a lot of passages felt like I was getting lectured.  I understand that for the story to work these were necessary, but there were definite times I had to push myself to get through because it was a lot like school and debating issues and history lessons.  Don't let the small page count fool you into thinking it'll be a quick, flimsy read: it's anything but. All 240 pages are packed with thought-provoking paragraphs and issues.

I was also a little thrown by the small amounts of racism addressed. I can understand the author wanting to raise some awareness or make a statement, but what little was mentioned seemed so randomly thrown in it made me a little confused. I felt like the issue of racism needed to be fully embraced and committed to (therefore having more of the story dedicated to it) or cut entirely.

Despite the negatives, there were positives:
Though there were some holes and letdowns to Scored, this is a book that needs to be read and discussed.

Posted by Ashley @ Ashley Loves Books at 1:00 AM