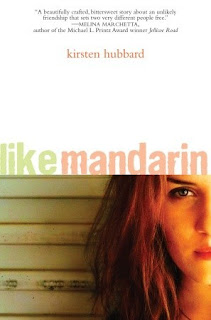 It's hard finding beauty in the badlands of Washokey, Wyoming, but 14-year-old Grace Carpenter knows it's not her mother's pageant obsessions, or the cowboy dances adored by her small-town classmates. True beauty is wild-girl Mandarin Ramey: 17, shameless and utterly carefree. Grace would give anything to be like Mandarin.

When they're united for a project, they form an unlikely, explosive friendship, packed with nights spent skinny-dipping in the canal, liberating the town's animal-head trophies, and searching for someplace magic. Grace plays along when Mandarin suggests they run away together. Blame it on the crazy-making wildwinds plaguing their Badlands town.

Because all too soon, Grace discovers Mandarin's unique beauty hides a girl who's troubled, broken, and even dangerous. And no matter how hard Grace fights to keep the magic, no friendship can withstand betrayal.
-------------------------Goodreads summary

Notable Quote
While it's smart to plan for the future, we won't find real happiness if our eyes never leave the horizon.

When I was reading this, I had to keep reminding myself that Grace is only 14-years-old -- so many instances I wanted to shake her and tell her to come to her senses! She was just so impressionable and naive, and it absolutely killed me.

I did not like Mandarin at all--but she's a great character because of that. She's a lost 17-year-old who needs to act out and chooses to do so in bad ways; when she finds Grace, a girl willing to do and be just about anything for or with her, how could Mandarin resist? I'm nothing like Mandarin and I don't think I would have been able to.

Their friendship is infuriating to me, because it's just such a bad thing and I wanted to step in and be the mother that Grace doesn't have in her own. I wanted to forbid her from seeing Mandarin and tell her all the wrong ways she was going about standing out -- even though I knew it would make Grace go faster. It was a very obsessive devotion from Grace, which was a bit disturbing to me. I was surprised at such a strong reaction I was having, actually, which is a testament to how well and consistent the characters and stories were.

Everything that happens in this novel makes sense, and as long as you remember the ages and circumstances, you'll enjoy it. The supporting characters were done really well, especially Taffetta, and each one has an integral part to the ending third of the book.

Truthfully, I was a bit underwhelmed by the book, and I can't quite pinpoint why. I don't think I had too many expectations after Wanderlove since it is such a different premise, and I don't think I went into it expecting anything. The first half felt a bit slow, but I powered through the last half. And while there's nothing bad at all about this book, there was nothing I was completely gushing over, either.