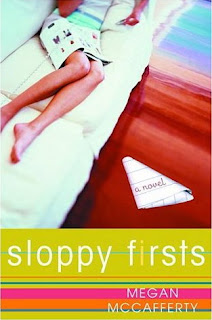 “My parents suck ass. Banning me from the phone and restricting my computer privileges are the most tyrannical parental gestures I can think of. Don’t they realize that Hope’s the only one who keeps me sane? . . . I don’t see how things could get any worse.”

When her best friend, Hope Weaver, moves away from Pineville, New Jersey, hyperobservant sixteen-year-old Jessica Darling is devastated. A fish out of water at school and a stranger at home, Jessica feels more lost than ever now that the only person with whom she could really communicate has gone. How is she supposed to deal with the boy- and shopping-crazy girls at school, her dad’s obsession with her track meets, her mother salivating over big sister Bethany’s lavish wedding, and her nonexistent love life?

A fresh, funny, utterly compelling fiction debut by first-time novelist Megan McCafferty, Sloppy Firsts is an insightful, true-to-life look at Jessica’s predicament as she embarks on another year of teenage torment--from the dark days of Hope’s departure through her months as a type-A personality turned insomniac to her completely mixed-up feelings about Marcus Flutie, the intelligent and mysterious “Dreg” who works his way into her heart. Like a John Hughes for the twenty-first century, Megan McCafferty taps into the inherent humor and drama of the teen experience. This poignant, hilarious novel is sure to appeal to readers who are still going through it, as well as those who are grateful that they don’t have to go back and grow up all over again.

Notable Quote
"You can only be in a bad mood for so long before you have to face up to the fact that it isn't a bad mood at all; it's just your sucky personality."

I'm really glad everyone kept recommending the Jessica Darling series, because I quite enjoyed Sloppy Firsts! I was a bit scared since I didn't immediately get into the book, but by page 50 I knew I was hooked.  Jessica Darling is such a hilarious, sorta-cynical dramatic. It definitely reminded me a bit of my own high school experience: the stress and rumors and insecurity and omg what did that means were absolutely spot on.

I liked how Megan McCafferty addressed all aspects of Jessica Darling's life: friends, school, after-school activities, family.  A lot of YA novels I've read seem to brush by some of those categories and I feel like there's a hole in the plot or a deliberate avoidance just to make the novel work out.  Not so with this one: I felt like I knew all of Jessica's life and could see how all of it was intersecting together and influencing the other.

How much Jessica missed Hope was also handled really well and very real, in my opinion.  As a Navy brat, people moving away or even myself moving was the norm. It was never a guarantee who would be back in school with you next year, and it was almost a given that someone's shelf-life at school was 3 years.  Hope's absence was pronounced and done quite well. Perhaps the only thing I missed was hearing Hope's side of the story and how she felt going to a new place with all new people and leaving behind her best friend - of course it's not her story so I can't hold that against Megan McCafferty, but it would be nice (maybe it will show itself more in the future books?) to know.

Also, Marcus Flutie and that poem?  Yes please.  If only boys I knew were that sexy in high school.