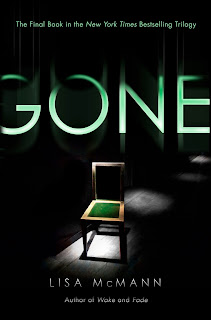 Life should be great for Janie—she has graduated from high school and is spending her summer with Cabel, the guy she’s totally in love with. But deep down she’s panicking about how she’s going to survive her future: Getting sucked into other people’s dreams is really starting to take its toll. Things get even more complicated when she meets her father for the very first time—and he’s in a coma. As Janie uncovers his secret past, she begins to realize that the choice she thought she had has more dire consequences than she ever imagined
-----------------Amazon Summary

Notable Quote
Because with the right person, sometimes kissing feels like healing.

I don't know about you, but when I pick up the last book in a series, my heart usually sinks. I put it off for awhile, I make excuses, I try to read as slowly as possible so it won't end. When series end, my heart dies a little.

The thing about Gone is that I powered through it like crazy. I didn't read it as soon as I got it, but the moment I picked it up, I put it down an hour later, thinking about the last line and how the series ended.  And I didn't feel that normal pang of loss, or get sucked into that Reader's Depression - partially because I never really connected with Janie or with the novel(s).  They were interesting and I loved the concept of getting caught in dreams, but Janie is so unlike me that it was never something I got.

It could be because of the style of writing, too. Such short, choppy bursts. Sometimes connected, other times not.  And this isn't a bad thing at all - in fact, I loved the style of this series. I think it fit the mood perfectly.

But anyhow. I liked this book, much better than I did Fade (see my review of Book #2 here!). One of the questions I'd had lingering throughout the series was Janie's family, and I'm glad this last book centered on it and how she would deal with her ability in relation to her mom (and now, her dad).

Nothing about the book surprised me, really, and I fully understood the opposing lives Janie was trying to choose between almost from the get-go. Probably the most emotion I felt was regarding her choice with Cabel, because...I didn't like what she initially decided on. I just felt like he was getting shafted, you know?

But still, it's an interesting read and an incredibly satisfying, if not fairly predictable, end to a fantastically original series.