Love-A-Thon Mini Challenge: Those That Started Me Blogging 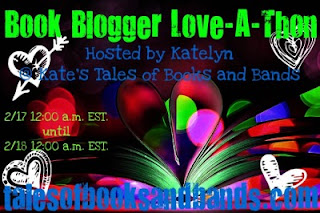 The prompt for this Love-A-Thon post is: Make up a mini post in the form of a thank you letter in which you say thanks to the blogs that inspired you to start your own book blog! It can be as heartfelt or as goofy as you want to make it!

So, here's the story about what inspired me to start blogging: I don't remember.

Truthfully, I can pinpoint the blog that set in motion me wanting to join this community; but I can't pinpoint exactly how I got to that blog!  I've been active in blogging communities for years now and read personal blogs and all that, and I'm certain one led to another that linked to another and so on.  I think it also coincided with Twitter, in that I followed John Green (@realjohngreen) because I adored his books. From there I started following Penguin Teen (@PenguinTeen), who probably retweeted a blogger at some point, and I followed the link and then we can cut-to me in mid-December signing up another Blogger blog as Ashley Loves Books!

I can also tell you the book that specifically led me to blogging: Across the Universe by Beth Revis. I picked up the book on a whim in the library (saw the cover, thought it was gorgeous!) in late October and fell so in love that I just absolutely had to find out all I could about it. I went to the website, I went to Beth Revis' Twitter, I googled A Million Suns to find out its release date.  And that search led to several reviews on book blogger sites, and I probably followed every single one of those blogs.

But like I said, there was definitely one blog that inspired me. I love her writing, I loved her book choices and how she was so fair and would be honest about if she wasn't too crazy about a book but it would still appeal.  Her blog was fab, and she linked to some great other bloggers and memes, and it all went from there.

This whole thing will sound stalker-y since she has no idea because I don't really comment too often or interact with her (it's kind of one of those like...'place her on a pedestal, why would she pay attention to me' situations -- I know, I know, I should get over that because she's probably one of the sweetest, but it's hard! I'm so new at this! It's like I'm a fangirl) but I do want to thank her in a very short letter:

I absolutely adore your blog. Each entry is short, sweet and so much fun with just the right amount of details to pique your interest but never give too much away.  You're hilarious with your stick figures, have impeccable taste (high school + boys really are the best books) and have never led me astray with suggestions. Thank you for doing what you do, because it's wonderful.

A fangirl who hopes she's not scaring you,
Ashley


I also want to mention The Broke and the Bookish, because Anna did a Top Ten Tuesday (I think it was the Halloween one?) and I loved the idea so much that I went to the site to find other people's lists. It's such a brilliant meme and each list is so unique and interesting that it begs for some great writing, great bloggers and great suggestions. I definitely utilize that meme to find books and other bloggers the most!

And that is the story of my inspiration to start a book blog :)
Posted by Ashley @ Ashley Loves Books at 3:06 AM

Email ThisBlogThis!Share to TwitterShare to FacebookShare to Pinterest
Labels: blog stuff, LoveAThon, thanks