The Son of Neptune (Heroes of Olympus #2) by Rick Riordan 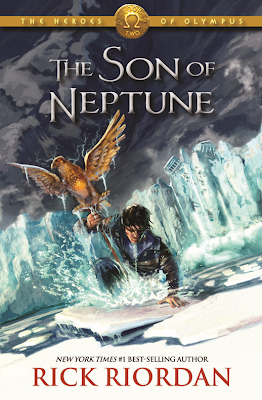 The Son of Neptune (The Heroes of Olympus, Book 2)

Percy is confused. When he awoke after his long sleep, he didn’t know much more than his name. His brain-fuzz is lingering, even after the wolf Lupa told him he is a demigod and trained him to fight. Somehow Percy managed to make it to the camp for half-bloods, despite the fact that he had to continually kill monsters that, annoyingly, would not stay dead. But the camp doesn't ring any bells with him.

Hazel is supposed to be dead. When she lived before, she didn’t do a very good job of it. When the Voice took over her mother and commanded Hazel to use her “gift” for an evil purpose, Hazel couldn’t say no. Now, because of her mistake, the future of the world is at risk.

Frank is a klutz. His grandmother claims he is descended from ancient heroes and can be anything he wants to be, but he doesn’t see it. He doesn’t even know who his father is. He keeps hoping Apollo will claim him, because the only thing he is good at is archery—although not good enough to help the Fifth Cohort win at war games. His big and bulky physique makes him feel like a clumsy ox, especially in front of Hazel, his closest friend at camp. He trusts her completely—enough, even, to share the secret he holds close to his heart.

Beginning at the “other” camp for half-bloods and extending as far north as the land beyond the gods, this breathtaking second installment in the Heroes of Olympus series introduces new demigods, revives fearsome monsters, and features other remarkable creatures, all of whom are destined to play a part in the most important quest of all: the Prophecy of Seven.


Notable Quote
"Life is only precious because it ends, kid." - Mars

This is my favourite Rick Riordan YA/MG novel so far - and I have read literally every single one of his and loved all of them, so that's a pretty big statement.  This is signature everything we love: adventure, suspense, mythology lessons cleverly masked, humor, and just the right smidgen of romance.

I particularly enjoyed the bits we got from the other novels, as well as the small tidbits of prophecy that allude to the future novels - I can't be the only one whose breathe caught when she realized the "Wisdom's daughter" who would struggle in Rome was Annabeth!

The characters in this book are also so well developed. Obviously Percy Jackson is, because he's a beloved Half-Blood who's got 5 previous books to his development (6, if we want to count The Lost Hero), and this book did not disappoint in the Percy we love and adore.  But Hazel, Frank, Mars, Frank's curmudgeon old grandmother, Reyna, Arion, even Sammy and Hazel's mother felt very real to me. There was a distinct-ness in each one that really stuck out. My favourite new one is Ella the Harpy (and her romance!), who is valuable and wise.

And, as always, the humor in this book is absolutely spot on. The jokes, the dry humor, the puns and sarcasm, absolutely all of it is fantastic. None of it is forced or uncalled for or even out of place.  When I'm laughing out loud in the middle of a coffee shop, it's good.

Highly recommend! It is a bit necessary to read this in order, but if you haven't been reading Rick Riordan's YA Fantasies anyway, now's a good time to get started! You won't regret it.