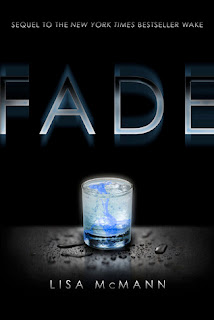 For Janie and Cabel, real life is getting tougher than the dreams. They're just trying to carve out a little (secret) time together, but no such luck.

Disturbing things are happening at Fieldridge High, yet nobody's talking. When Janie taps into a classmate's violent nightmares, the case finally breaks open -- but nothing goes as planned. Not even close. Janie's in way over her head, and Cabe's shocking behavior has grave consequences for them both.

Worse yet, Janie learns the truth about herself and her ability -- and it's bleak. Seriously, brutally bleak. Not only is her fate as a dream catcher sealed, but what's to come is way darker than she'd feared....
---------------------Goodreads summary

This entire series is incredibly fascinating to me. It's so original and something that I would never in a million years think to conceive. When I read Wake (Book 1), I was riveted. It was such a novel idea and seeing Janie work through controlling her ability alongside this newfound relationship with Cabel - a boy with just as much darkness as Janie - was interesting. I remember speeding through it.

Unfortunately, Fade didn't have that same effect. It was still good, and I'm still curious about the entire situation and what will happen in Book 3. I was grateful for the introduction of Miss Stubin to explain a bit more about this ability. I thought the case Janie took on was creepy and perfect for what she could do, and I'm still intrigued (and, admittedly, smitten) with Cabel.

But the entire book seemed kind of...forced. I didn't find the case at Fieldridge High believable - it seemed halted, a bit jumbled, and then resolved so quickly it was almost like it was just another day. Cabel pulling away when it got real was typical and expected. Janie's shutting down when he went away was typical and expected. Yes, it fits with their character types (alone, used to looking out for self, lost after they get their first taste of love/caring), but I had hopes they would be stronger than that.  The scandal and culprits were also predictable to me.

I do still want to see how Janie and Cabel will figure out their life together and if her life will follow the downward spiral of Dream Catchers before her. I'm hoping Fade just succumbed to the curse of Book 2s in a trilogy, that its function is more of the informative bridge to an explosive ending.