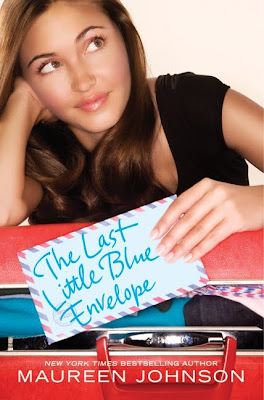 Ginny Blackstone thought that the biggest adventure of her life was behind her. She spent last summer traveling around Europe, following the tasks her aunt Peg laid out in a series of letters before she died. When someone stole Ginny's backpack—and the last little blue envelope inside—she resigned herself to never knowing how it was supposed to end.

Months later, a mysterious boy contacts Ginny from London, saying he's found her bag. Finally, Ginny can finish what she started. But instead of ending her journey, the last letter starts a new adventure—one filled with old friends, new loves, and once-in-a-lifetime experiences. Ginny finds she must hold on to her wits . . . and her heart. This time, there are no instructions.

Notable Quote
"She probably tripped because she'd been warned and was telling herself not to trip over the bike. She did that sometimes. It was often easier not to know what obstacles were in the way."

Even though I was really happy how the first book ended, I was excited to hear that the second one would finally reveal what Aunt Peg had written!  ...and then you find out that bastard Oliver won't tell us.  I was crushed.

But I was also hooked. Even from the beginning, I didn't hate Oliver. It could be because I have an old longtime friend named Oliver who I absolutely adore, so it's hard for me to hate the name when it calls up some wonderful memories - but really, there was something about the framing of the character that made me give him a chance. That made me keep going to figure out who the hell he was and why the hell he was torturing Ginny like this!

I've also never quite liked Keith. Sure, he's that artsy, whimsy boy we all secretly dream about being whisked away with, but that also means he's flaky and flighty and VERY likely to break a heart.

I love this book. It took me right along on the whirlwind ride of one last adventure, and I was heartbroken and waiting with baited breathe as I went through each situation. I was constantly trying to work out what would happen, and it felt like I lost Aunt Peg right along with them - again.

Perhaps the only drawback is that it's...minorly predictable. There were a few tiny twists that made me go, "OH! Wow..." but most of it I could figure out.  I wasn't at all disappointed it worked out the way I thought it would though! I was quite happy about that, really.  If you've read the first one, definitely read this one, too - it ruins nothing.